Learn to Use a 'Full-Court Press'

Update Required To play the media you will need to either update your browser to a recent version or update your Flash plugin.
By Anna Matteo and Marianne Christiano
05 May, 2018

Each week we explore the meaning of words and expressions used in everyday American English.

People all over the world love sports. Some of us play a sport for fun; some to stay in shape; a few, for the love of the game; and even more play to win. 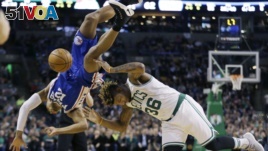 A player for the Philadelphia 76ers falls as he tries to block a shot by Boston Celtics' player in this 2017 NBA basketball game. (AP Photo/Elise Amendola)

If you play to win, you had better have a game plan. A game plan is just like it sounds – a plan to win the game.

But we use this expression for just about anything!

If a friend says "Hey, let's take a trip this weekend," you could answer, "Sure! What's the game plan?" If your business is facing competition from another company, you might need to change your game plan to beat them in sales.

But, now let's go back to the world of sports.

Many English expressions come from how we play sports. For example, we play some sports – such as baseball and football – on a field. We play basketball on a court. And that leads to our next expression: a full-court press.

"Court," in this case, has nothing to do with trials and judges. It is a basketball court. And "press" does not mean newspapers or the news. In basketball, it means a very forceful effort by one team to take control of the game.

In everyday life, "press" means to put pressure on someone to do something. Of course, this does not work with everyone. With some people, the more you press them, the more they will NOT do what you ask.

For those who do not watch the sport, a basketball team scores by putting the ball through the basket at the opponent's end of the court. Then the team usually runs quickly back to its own end of the court to defend its basket. The players try to keep the other team from scoring.

However, in a "full-court press," a team does not retreat after it scores. Instead, it attacks or pressures its opponent with a very aggressive defense.

So, do not save "full-court press" for a basketball game. You can use this expression anywhere! Use it in any situation where you want to meet a goal or solve a problem.

For example, we can use it in politics.

"The supporters of the safe cosmetics bill launched a full-court press to help it pass. Activists, consumer watchdog groups and women's health organizations used all of their resources to achieve this goal."

We can use it when talking about business.

"The clothing company planned a full-court press to beat its competitors during the profitable Christmas buying season. They cut prices, planned special in-store events and gave away prizes to attract more customers."

We also can use it in our personal lives.

"When Sally ran into health problems, her friends used a full-court press to help her out. Until she felt better, they cooked her meals, cleaned her house and walked her dogs."

So, if you have a really important problem to solve or project to do, make sure that your game plan involves a full-court press. Be aggressive and attack it from all sides.

Anna Matteo and Marianne Christiano wrote this story. George Grow was the editor.

cosmetics – n. a substance (such as a cream, lotion, or powder) that you put on your face or body to improve your appearance

watchdog – v. one that guards against loss, waste, theft, or undesirable practices

attract – n. to cause (someone) to like or be interested in something — usually used as (be) attracted