What Does It Mean to Go 'Haywire?'

Update Required To play the media you will need to either update your browser to a recent version or update your Flash plugin.
By Anna Matteo
25 November, 2017


Welcome to Words and Their Stories, from VOA Learning English!

Today, we are going on a make-believe trip to the countryside to learn about a word that comes from something used on a farm – haywire.

Like it sounds, haywire is a strong, thin wire. Farm workers often use it to tie up hay grown in the fields. They roll up the long, cut grass and store it in large bundles.

Later, when farm animals need to be fed, the wire is cut. You need to use a hatchet or something else with a very sharp edge to cut the wire. Haywire does not break easily. But it can get easily twisted together by accident. 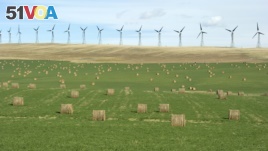 In the background, a wind farm generates electricity. In the foreground, bales of hay dot the landscape, 2010.

So, that is the farm material called haywire. But what does it mean to go haywire? The expression "to go haywire" has several meanings.

"To go haywire" can mean to turn crazy, unreasonable or wild, as in this example: "If I don't take a break from work soon, I am going to go haywire!" Here, the expressions flip out or freak out have a similar meaning. These are all informal or for everyday use. If you want to be more formal, you could use the word berserk.

"To go haywire" also means to start malfunctioning or failing to operate normally. We often use this expression for machines that don't work as they should.

For example, let's say we are visiting a peanut butter factory. A machine used to pump peanut butter into jars suddenly goes haywire. It squirts peanut butter everywhere – on the floor, on walls and on factory workers. Soon the whole area is covered with the tasty, but sticky food! So, the machine is not only broken, it made a huge mess.

"Haywire" can also mean to become out of control. When a process fails to work as planned, you can also say it ran amok. This expression is more formal. Here is an example of this meaning of "haywire."

"Urgh. Plans for my outdoor party just went haywire! The supermarket can't bring the birthday cake. The musicians refuse to play. There's no place to leave a car because of unannounced street repairs in front of my house. Oh ... great. And it's going to rain. It's going to rain hard!"

But how did this simple farm word come to mean "go wild"? Language experts say there are two stories that help explain where this meaning came from.

As we said earlier, Americans use haywire to describe a state of disorder, extreme messiness – in other words, a situation where everything seems to be going wrong.

Years ago, farmers used haywire to temporarily fix a damaged fence, gate or barrier. But the wire was never a good choice for permanent repairs because it breaks down easily. The metal iron turns reddish brown and wears down when attacked by oxygen in the air or water. It other words, it rusts!

This fact, however, did not stop people from using it for repairs. As a result, many fences and buildings where lots of wire were used for repairs look messy. They have gone haywire.

Another story about "haywire" comes from the material itself. When you cut tightly wound wire, you should do so carefully. It can suddenly spring back at you like a snake. It can circle your body and then stab you with its sharp ends. This can happen quickly, often catching a person off guard.

Word experts may not agree on the origin. But they can agree that anything that has "gone haywire," has gone crazy or is a big, hot mess!

Anna Matteo wrote this story with additional reporting from Jessica Berman. George Grow was the editor. The song at the end is "Fools Button" by Jimmy Buffet.

hay – n. grass that has been cut and dried to be used as food for animals

bundle – n. a group of things that are fastened, tied, or wrapped together

jar – n. a widemouthed container made typically of earthenware or glass

squirt – v. to come forth in a sudden rapid stream from a narrow opening

amok – adv. in a wild or uncontrolled manner — used in the phrase run amok

off guard – verbal phrase in an unprepared state : not ready

hot mess – n. informal : something or someone that is emphatically a mess: such as something in a state of extreme disorder or disarray