Improve Your English with Latin!

Update Required To play the media you will need to either update your browser to a recent version or update your Flash plugin.
By VOA
15 August, 2015


From VOA Learning English, this is Words and Their Stories.

Many people say not enough Americans speak a foreign language. A contrario! (On the contrary!) Americans use many Latin phrases, sometimes without even knowing it. The fields of law and medicine are filled with Latin words. But people also use Latin words and phrases in everyday, spoken English.

One common Latin word is per se. Per se is used to show that something is considered by itself, alone and not along with other things. For example, let's say your boyfriend watches soccer every night at his friend's house. You could tell him that it's not his watching soccer that bothers you, per se. It's the fact that you never see him!

Speaking of a soccer, anyone who talks about one sports team versus another is using Latin too. Like good superhero films? They often use Latin when they talk about Good versus Evil. You often see versus written simply as "vs."

Et cetera is another Latin phrase that is more commonly written as "etc." Et cetera means there are others in a grouping, especially of the same kind. We often use the phrase to replace "and so on and so on." But people often mispronounce "et cetera." They say "eck-cetera." Now you know not to. 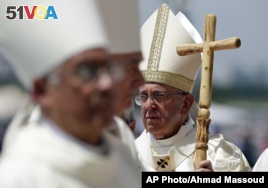 In this July 2015 file photo, Pope Francis leads a service in Ecuador. In the U.S., Catholic services in Latin are growing in popularity. (AP PHOTO)

Caveat emptor is a phrase used in commerce, the buying and selling of stuff. It's also used in legal situations. Caveat emptor means "let the buyer beware." The person buying something is responsible for making sure it works properly. So, if you buy a broken car without testing to see if it actually runs, you have no one to blame but yourself.

Let's say a friend sells you a car that does not run. She may become persona non grata to you. Persona non grata is a person who is unwelcome. This phrase is used in legal situations as well as casual ones.

However, if someone makes you a bona fide deal on a car, you are probably getting a better deal. "Bona fide" is Latin for "good faith." A bone fide deal is made in an honest way.

You should still be careful though. If a friend does something for you – like selling you a good car at a good price – she may expect a quid pro quo. In other words, she may expect something in return. You might hear people say, "You scratch my back, I'll scratch yours," which basically means the same thing. But the Latin phrase "quid pro quo" sounds a lot more professional.

Dr. Lector: "Quid pro quo. I tell you things. You tell me things. Not about this case, though. About yourself. Quid pro quo. Yes or no? Yes or no, Clarice? Poor little Katherine is waiting."

Personally, I would not agree to a quid pro quo with a man who eats people. But that's just me.

If you have a friend who feels a quid pro quo is the status quo, simply the way things are, you may want to find another friend. But if you are happy with the status quo, then you do not want the current situation to change.

So, now you can sound even smarter by using some of these common Latin terms in your everyday English. And that's the bona fide truth.

I'm Anna Matteo and that's it for this week's Words and Their Stories.

commerce – n. activities that relate to the buying and selling of goods and services

casual – adj. done without much thought, effort, or concern