Put Your English Studies in the 'Limelight'

Update Required To play the media you will need to either update your browser to a recent version or update your Flash plugin.
By Anna Matteo
26 May, 2018

On this show, we talk about expressions that Americans use in every day speech.

Today we shine the spotlight on terms that demand our attention. 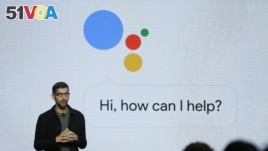 FILE - Google CEO Sundar Pichai is under the "spotlight" as he talks about Google products in San Francisco, Oct. 4, 2016.

Andy Warhol was an American artist. He was in the limelight of the pop art movement in the 1960s and 1970s. Warhol once said that "everybody will be famous for 15 minutes." And he said this long before the arrival of social media and YouTube.

Today, you can do anything to become famous.

Just look at the Kardashian family. Reality television made the Kardashians famous for just being themselves. It helps that nearly every member of the family seems to like being in front of the camera. They enjoy being in the spotlight. And they have been in the limelight for a lot longer than 15 minutes.

They have become household names. This terms means exactly as it sounds – names that are well-known in many households. In other words, they are very famous.

But enough of the Kardashians! Let's go back to those terms.

Both "limelight" and "spotlight" come from the world of theater.

"Spotlight" is easy to understand. Spotlights are the bright lights used in a theatrical production. They shine light on the most important action in a play. It is where people should be looking.

For the history of "limelight," we turn to the Merriam-Webster online dictionary. Its explanation is more interesting.

A limelight is a lighting instrument. It was used in theaters to light the front of the stage. The light came from a fire. The fire was directed at a box filled with the mineral lime. Then a lens, a piece of glass, would concentrate the brightness, making the light more intense.

Merriam-Webster notes that Thomas Drummond, an engineer, invented limelight in 1816. He wanted to make boating safer by lighting dark coastlines. But limelight was too dangerous to be used in lighthouses. In fact, it is a wonder that more of those early theaters equipped with limelight did not burn to the ground.

When used as a noun, "limelight" and "spotlight" are interchangeable. One word can be used in place of the other. However, "spotlight" is probably the more common term.

The big difference is that English speakers use "spotlight" as both a noun and a verb. "Limelight" is only used as a noun. So you could not use "limelight" in these examples.

The teacher spotlighted a period of ancient history to his students.

While the owner of the company is in town, it is important to spotlight any problem that requires her attention.

Now, spotlight and limelight may have both come from the theater, but we use them everywhere.

The basketball player stole the limelight from her teammates with her amazing three-point shots.

A wealthy businessman did not want to be in the spotlight of the project and chose to remain in the background.

Situations, issues and problems can all be spotlighted or can all be in the limelight. Here are two examples:

The real estate agent made sure to spotlight the fact that the house was located in a safe neighborhood with highly-rated schools.

On the campaign trail, the politician's personal scandals were very much in the limelight.

To be in the limelight or the spotlight means that you are the object of public attention. As the expression goes, ‘all eyes are on you.' You have taken center stage. This is also a theater term.

"Upstaged" means to direct attention away from something.

People can be upstaged.

An issue can also upstage another.

For example, let's say the main issue of the parent-teacher meeting was supposed to be raising money for the school. But that issue was upstaged by the discovery that the principal was fired! All the parents wanted to know more about the scandal!

So, just remember, anything that has been upstaged is no longer center stage. It's no longer in the limelight or spotlight.

And that's Words and Their Stories for this week.

Have you ever found yourself in the limelight? Or were you responsible for shining the spotlight on something that needed attention? Have you ever been upstaged? Let us know in the Comments Section.

Anna Matteo wrote this story for VOA Learning English. George Grow was the editor. The song at the end is Madonna singing "Spotlight."

stage – n. a raised platform : the part of a theater on which the acting takes place and which often includes the wings

concentrate – v. to think about something : to give your attention to the thing you are doing, reading, etc.

background – n. a position that attracts little attention : used to describe something that occurs without requiring attention while something else is also occurring

upstaged – v. to take attention away from (someone or something else, such as another performer)