What Is Your New Year's Resolution?

Update Required To play the media you will need to either update your browser to a recent version or update your Flash plugin.
By Anna Matteo
07 January, 2017


And now Words and Their Stories -- a weekly program from VOA Learning English.

Our show explores the roots and modern uses of expressions in American English.

Today we talk about the word "resolution." Resolution is a word with more than one meaning.

However, when talking about a New Year, a resolution is a promise people make to themselves to be better. The person decides to make a serious effort to do something over the next 12 months.

Many people use the start of a new year as a time to try something new or change something about themselves. This use of resolution dates back to the late 1700s. These earlier resolutions were usually of a religious nature. 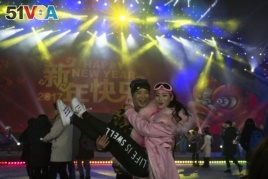 A man and a woman pose for photos after the countdown to the New Year at an event in Beijing, China, Sunday, Jan. 1, 2017. (AP Photo/Ng Han Guan)

However, these days, New Year's resolutions are usually about living healthier, having more success and finding greater satisfaction in life.

So, some common New Year's resolutions are to:

Some people may make a New Year's resolution to improve only one area of their life. Others may feel they need to completely change everything. These people may use the New Year as a time to turn over a new leaf! Turning over a new leaf means to make a change and behave in a more responsible manner.

At the start of a New Year, you can wipe the slate clean. This means you can simply wash away all the mistakes you made from the past year, as one would remove chalk from a school black board.

Just remember that before you start from a clean slate, learn from the mistakes you made. If not, you may find yourself going back to square one. Some word historians say this expression comes from a board game called Snakes and Ladders. In this game, you begin on square one and win by climbing the ladders to the last square. However, landing on a snake could send you back to the first square, or the very beginning.

The expression back to square one could have come from the game Hopscotch. This game also begins on a box marked with the number "1."

The phrase go back to the drawing board comes from Peter Arno, who worked as a cartoonist for New Yorker magazine. In 1941, he made a cartoon showing military men running toward a crashed plane. The designer of plane is seen walking away with his designs under his arm. The caption says, "Well, back to the old drawing board".

So, for many people the New Year is a good time for a fresh start.

Still, many people do not make New Year's resolutions. They do not want to put added pressure on themselves. Or they are happy with what they are doing and how their lives are progressing.

And some people may think that there is no reason to try so hard to change yourself. They may agree with the old saying that a leopard never changes its spots. This means you are born as you are born and no amount of effort can change that.

After all, change can be hard. Getting up early to exercise every day is hard.

Setting aside time every day to learn a new language or musical instrument is not easy.

As we get older, it might be even more difficult for people to change their behavior. Maybe that's way we say, "You can't teach an old dog new tricks."

Let's turn over a new leaf. And baby, let's make promises that we can keep and call it our New Year's resolution.

slate – n. a tablet (as of slate) used for writing on

cartoon – n. a drawing in a newspaper or magazine intended as a humorous comment on something

caption – n. a sentence or group of words that is written on or next to a picture to explain what is being shown