Words and Their Stories: Nicknames for Philadelphia and Boston

Update Required To play the media you will need to either update your browser to a recent version or update your Flash plugin.
By Shelley Gollust
02 June, 2012

Now, the VOA Special English program, WORDS and THEIR STORIES. Almost all American cities have nicknames. They help establish a city's identity. They can also spread unity and pride among its citizens.

Two east coast cities -- Philadelphia and Boston -- were both important in the early history of the United States. Philadelphia is best known as The City of Brotherly Love.

In sixteen eighty-one, King Charles the Second of England gave William Penn a large amount of land to establish a colony. The king named the colony Pennsylvania in honor of Penn's father. William Penn was a Quaker. He brought his beliefs about equality, religious freedom and brotherly love to this new land. Penn was also an expert in Latin and Greek. He established a city and named it Philadelphia, which is Greek for "brotherly love." An ancient city called Philadelphia was also noted in Christianity's holy book, the Bible.

Philadelphia became the social, political and geographical center of the American colonies. In the late seventeen hundreds, many events that took place in Philadelphia gave birth to the American Revolution and independence. For example, the Declaration of Independence and the Constitution were signed in the city. Philadelphia was the temporary capital of the new nation from seventeen ninety to eighteen hundred.

Some of Philadelphia's other nicknames are The Quaker City, The Cradle of Liberty and The Birthplace of America. Philadelphia is a long name. So many people just call it Philly.

Boston is another important city. It is one of the oldest cities in the United States. In sixteen thirty, Puritan settlers from England established Boston in what would become the state of Massachusetts. 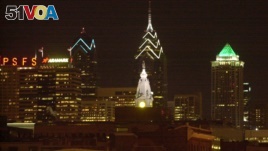 This picture of the Philadelphia Skyline shows some of the building tops lit up in green in a show of support for the Philadelphia Eagles
Several major events took place in Boston before and during the American Revolution. You may have heard of the Boston Massacre, the Boston Tea Party and the Battle of Bunker Hill.

However, Boston's most famous nickname is Beantown. But it was not because the city grew a lot of beans. In the seventeen hundreds, Boston was a major trading center. It received a lot of sugarcane from the West Indies. Beans baked in molasses, a sugar product, became a favorite food in the city. Today, no companies there make Boston baked beans. Restaurants in Boston rarely serve it. But many Americans eat this tasty dish at home.

This program was written by Shelley Gollust. I'm Barbara Klein. You can find more WORDS AND THEIR STORIES at our website, 51voa.com.
Related Articles
go top