No Guts, No Glory!

Update Required To play the media you will need to either update your browser to a recent version or update your Flash plugin.
By Anna Matteo
17 June, 2017


Now, from VOA Learning English, it's time for Words and Their Stories.

Today we explore a word that does not sound very pleasant -- gut. 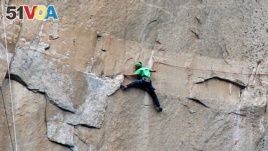 This takes guts! In this 2015 photo, Kevin Jorgeson climbs El Capitan in California's Yosemite National Park. This has been called the hardest rock climb in the world. (PHOTO Tom Evans)

In the medical world, guts are the internal organs of an animal. It's a person's stomach or the part of the body that contains the stomach.

But in our everyday conversations, "guts" mean many different things.

In the United States, if you bust a gut you are laughing really, really hard -- so hard that your stomach starts to hurt.

If you haven't busted a gut in years, maybe you should. It feels good to have a really good laugh.

Now, just as our guts are inside of us, the inside parts of a machine are sometimes called guts, too. So, if you gut your computer, you take out all the pieces inside that make it work.

You can gut something, like a fish. This means you remove its internal organs before cooking it. You can also gut a building by removing everything from the inside. My friend who renovated her house, for example, gutted the entire structure first.

The most important parts of a business deal or a piece of legislation are also called the guts. And if you gut these things, you remove all the important parts. For example, you could say that after the council member gutted the legislation, it wasn't going to be nearly as effective.

Now, let's talk about you.

Within you are all your important thoughts, fears, dreams, feelings and secrets. If you spill your guts, you share these things with other people.

It's an informal saying but you can use it when talking about any situation . If your best friend has a date and shares all the details with you, she has spilled her guts. Perhaps at work, a co-worker spills his guts when he tells you that his bossy personality actually comes from a deep childhood fear of failing.

When spilling your guts, be careful. Remember, once you say something, you cannot take it back!

Now, if you strongly dislike someone -- I mean really, really hate them -- you can say you hate their guts. You hate everything inside them. This is a very harsh statement and sounds a little childish.

You know, if you think about it, all those internal organs are important. They may not be pretty, but they keep us alive.

So, guts can also mean some really great things.

For example, the word "guts" is an informal way of saying "bravery" or "courage." It takes guts to make a very difficult decision.

Let's say you want to move to a country where you don't know anyone and don't know the language. You want to make a big change and take a chance!

Your friends who have lived in the same town all their lives say, "Wow, that takes a lot of guts." For right now, they don't have the guts to make such a big change.

This is where we get our expression "no guts, no glory." This means that if you do not have courage to take a risk, you will not be able to achieve a goal or success.

It might be scary. But you know in your gut that it's something you must do. Used this way, "gut" means a strong feeling about something.

We can also use "gut" as an adjective. For example, your gut feelings are not based in logic or reason. Let's say I'm your best friend. When I hear about your plans to move away, my gut reaction is to ask, even beg, you to stay.

But my gut also tells me that this is something you must do.

So, I tell you to listen to your gut. Go chase your dream!

After a year's time, I finally get the guts to do the same thing. We meet in Paris and then move to Russia to live for a year!

And that's the end of this Word and Their Stories.

Is this body part, the gut, used the same way in your language? Let us know in the Comments Section.

Anna Matteo wrote this story for VOA Learning English. Ashley Thompson was the editor. The song at the end is "No Guts, No Glory," by John Van Tongeren. It is the theme song from the American television cartoon Adventure of the Galaxy Rangers.

bravery – n. the quality or state of having or showing mental or moral strength to face danger, fear, or difficulty

courage – n. the ability to do something that you know is difficult or dangerous

bossy – adj. tending too often to tell people what to do : often giving orders in a way that people do not like

logic – n. a proper or reasonable way of thinking about or understanding something