Famous Proverbs from a Famous Man

Update Required To play the media you will need to either update your browser to a recent version or update your Flash plugin.
By Shelley Gollust
06 April, 2019

On today's program, we talk about popular sayings, called proverbs. Many you will hear today come from a very famous person in American history -- Benjamin Franklin.

Today we talk about proverbs. A proverb is a short, well known saying that expresses a common truth or belief. Proverbs are found in most cultures and are often very old. 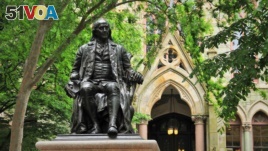 This is a statue of Benjamin Franklin. He is known for many proverbs that are still widely used today.

In American history, Benjamin Franklin was famous for his proverbs. Franklin lived in the 1700s. He was a leader of the American Revolution against English rule. He was also a scientist, inventor and writer.

For many years, Franklin published a book called "Poor Richard's Almanac." He included many proverbs that he had heard or created. Some of them are still used today. Like this one: "Early to bed and early to rise makes a man healthy, wealthy and wise."

Franklin is also remembered for other proverbs like, "A penny saved is a penny earned." This means that money should not be wasted.

Here are other examples of proverbs that Americans use. The first ones are about love. Some people say, "All is fair in love and war." They mean that anything you do in a relationship or in battle is acceptable.

Another proverb about love is, "Absence makes the heart grow fonder." This means you love someone even more when he or she is far away. But other people say, "Out of sight, out of mind." You may not even think about that person when he or she is not with you. Which of these proverbs do you think is most true?

Another proverb says "Love is blind." In other words, when you are in love with someone, you may refuse to see anything bad about that person.

Here is another popular saying about love: "The way to a man's heart is through his stomach." Some people believe that a woman can win a man's love if she prepares his favorite foods.

Some people are only interested in having a relationship with someone who is very good-looking. You might tell them that "Beauty is only skin deep." Your girlfriend may be lovely to look at, but she may also have some bad qualities. Or the opposite may be true. Your boyfriend is a wonderful person, but not good-looking. So what a person looks like is not really important.

Another proverb is true in love and war or other situations: "Actions speak louder than words." It means that what you do is more important than what you say.

Sadly, we have no more time for this program. So we must say, "All good things must come to an end."

Shelley Gollust wrote this story. Barbara Klein read it. And the song at the end is Nelly Furtado singing "All Good Things (Must Come to an End.)"