How Will You 'Ring in the New Year?'

Update Required To play the media you will need to either update your browser to a recent version or update your Flash plugin.
By Anna Matteo
30 December, 2017

Everyone around the world celebrates the New Year differently and at different times. Most people in the U.S. celebrate it on January 1. But they may also observe New Year traditions from other religions or cultures. 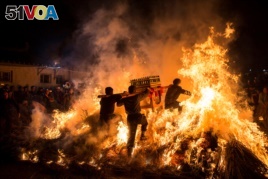 Men carrying a shrine jump over a bon fire, which means a wish for good luck during a traditional Chinese lunar new year celebration in Jieyang, Guangdong province, China, February 2, 2017.

No matter when you celebrate the New Year, it usually involves thinking about the past year and planning for the year ahead.

People have many different ways of ringing out the old and ringing in the new. But why are bells linked to the calendar change?

In the Christian and Buddhist religions, bells are often connected with the New Year. The website CatholicCulture.org explains that "bells serve as a beautiful symbol introducing a new year to be spent together as a community of families ..."

Another website describes how bells are used in Japan on New Year's Eve. "As midnight approaches, Buddhist temples around the country begin ringing out the old year, sounding the temple bell 108 times." Each ring of the bell stands for each of the earthly desires a Buddhist must try to overcome -- all 108 of them!

Even those who aren't religious but are a little superstitious, may ring bells at the stroke of midnight on New Year's Eve to scare off bad luck.

These age-old traditions have given us the phrase "to ring out the old and ring in the new."

The English poet Alfred Lord Tennyson (1809-1892) made the phrase popular with his poem "In Memoriam [Ring Out, Wild Bells]." In this poem, Tennyson rings out, or says farewell to, the bad, and he rings in, or says hello, to the good.

Tennyson wrote this poem for Arthur Henry Hallam. The two students met at Cambridge University and quickly became best friends, both showing great promise as writers. Hallam helped Tennyson publish volumes of his poetry in 1830 and 1832.

The friends almost became family when Hallam became engaged to the poet's sister, Emily. However, before they could wed, Hallam died of a brain hemorrhage. He was only twenty-two years old.

To remember his good friend, Tennyson wrote the poem "In Memoriam." He also named one of his two sons Hallam.

Here is Jonathan Evans reading the first part of that poem.

Ring out, wild bells, to the wild sky,

The flying cloud, the frosty light:

The year is dying in the night;

Ring out, wild bells, and let him die.

Ring out the old, ring in the new,

Ring, happy bells, across the snow:

The year is going, let him go;

Ring out the false, ring in the true.

Ring out the grief that saps the mind

For those that here we see no more;

Ring out the feud of rich and poor,

Ring in redress to all mankind.

Ring out a slowly dying cause,

And ancient forms of party strife;

Ring in the nobler modes of life,

Thanks, Jonathan. And thank you, our listeners, for the time you have spent reading and listening to Words and Their Stories these past twelve months.

We here at VOA Learning English wish all of you a happy start to the New Year.

For the New Year, what do you plan to ring in? Also in the coming New Year, what words, expressions or phrases would you like to learn more about? Let us know in the Comments Sections.

Anna Matteo wrote this story. Kelly Jean Kelly was the editor. At the end of the story, Regina Spektor sings "My Dear Acquaintance (A Happy New Year)."

desire – n. the feeling of wanting something

superstitious – adj. of, relating to, or influenced by superstition

superstition – n. a belief or way of behaving that is based on fear of the unknown and faith in magic or luck : a belief that certain events or things will bring good or bad luck

stroke – n. the sound of a bell being struck (The bell rung at the stroke of twelve.)

hemorrhage – n. a condition in which a person bleeds too much and cannot stop the flow of blood

sap – v. to use up the supply of (something, such as a person's courage, energy, strength, etc.)

feud – n. a long and angry fight or quarrel between two people or two groups

redress – v. to correct (something that is unfair or wrong)

noble – adj. having, showing, or coming from personal qualities that people admire (such as honesty, generosity, courage, etc.)

mode – n. a particular form or type of something (such as transportation or behavior)

manner – n. behavior while with other people