Update Required To play the media you will need to either update your browser to a recent version or update your Flash plugin.
By Christopher Jones-Cruise
14 May, 2016

Baseball is often called America's game. This may or not be true but a baseball game is a great place to learn American English.

So, let's go to the ballpark! My colleague, Christopher Jones Cruise, invited me to a baseball game recently. Let's hear how it went. 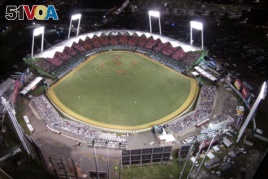 Anna, thanks for coming to the game today! It's going to be a great game. The teams are from two countries. The Toronto Blue Jays traveled from Canada to Washington, D.C., to play the Washington Nationals.

I've never been to Nationals Park before! It's really ... big! But it's raining. Is that going to affect the game?

Well, the weather experts said the rain in the D.C. area would be intermittent. It's going to rain for a few minutes and then stop before possibly starting again. It'll be fine.

Oh, and don't let me forget to pay you for the tickets.

Don't worry about the tickets. I only paid $5 a seat!

Seating close to the field for some games can be expensive. Do you see those seat all the way down there behind home plate? They can cost $375! So five dollars for a seat is a great deal!

You know, some people from work say I'm a cheapskate.

I'm not a cheapskate. I just love the idea of saving money and enjoying the game in the ‘cheap seats'.

Oh, I don't mind seats this far away. But, you know, my eyesight is not that good. In fact, it looks like there's a huge, furry animal down there on the field.

There's nothing wrong with your eyesight. That is a big furry animal on the field. It's the team mascot. You know, people in costumes that get the crowd excited.

Oh! Well, that mascot is doing a good job. Everyone is excited. Oh, look, they have big screens televising the game. I can watch the game on those.

Those are called "Jumbotrons!"

That's a cool name. Look at the crowd. We all look funny all wearing these cheap rain covers. You know Christopher, I think the rain is falling harder. And it's been raining for 20 minutes.

It won't be a problem. Trust me.

ANNOUNCER: Attention, folks. We have a problem. We would like to announce that the game will be delayed due to inclement weather.

Oh. The game is delayed.

Yes. I heard that.

I guess they want to sound fancy instead of just saying it's "stormy."

Look, many fans have moved inside the stadium. What are those people doing on the field with that big blue plastic thing?

That is a plastic tarp and they are covering the field. It will keep the field from getting too wet. Teams often cancel games when the field is soaked with water. Baseball players can get injured when they play on a field that is wet or muddy.

Yeah, I guess team owners don't want to lose money if a player gets hurt. They pay some players millions of dollars a year to play a ballgame! Unbelievable.

Hey, the rain ... it seems to be slowing. Maybe the game will start soon!

I don't think so, Christopher. Look, an official is coming out to check the field. Now, it looks like he is signaling to someone. It looks like a weird dance.

ANNOUNCER: We are sorry to announce that tonight's game is canceled.

No! The game is rained out! The fields can't be that damaged from the rain.

ANNOUNCER: The field is really damaged from the rain. But keep your tickets. There will be a make-up game tomorrow. It will be a doubleheader. The first game is at one o'clock in the afternoon. The second game would be played at seven o'clock. Thank you for your understanding.

See, it's not so bad. You can see two games tomorrow, a double-header.

I can't come tomorrow. I have to work.

Oh, I'm off. Can I have your ticket? I'll bring a friend.

Sure. Well, since they called the game, we have to leave the stadium

At least, the officials for the Nationals have a sense of humor.

What do you mean? There's nothing funny about a rained out baseball game.

Listen. Don't you hear the song they are playing on those large speakers throughout the park? "Laughter in the Rain" by Neil Sedaka!

What happens in your country when rain falls before or during a sports event? We want to hear from you. Write your thoughts in the comments section.

VOA's Christopher Jones-Cruise reported on this story and wrote it with Anna Matteo for Learning English. George Grow was the editor.

fancy – adj. not plain or ordinary

stormy – adj. relating to or affected by a storm

fan – n. an enthusiastic devotee (as of a sport or a performing art) usually as a spectator

stadium – n. a very large usually roofless building that has a large open area surrounded by many rows of seats and that is used for sports events, concerts, etc.

inclement – adj. having rain and storms

soaked – adj. to put (something) in a liquid for a period of time

signaling – v. something (such as a sound, a movement of part of the body, or an object) that gives information about something or that tells someone to do something

make up – adj. to do or take in order to correct an omission <make up a history exam>

doubleheader – n. two games (especially baseball games) that are played one after the other on the same day

called the game idiomatic expression : to cancel a ballgame

sense of humor – n. a personality that gives someone the ability to say funny things and see the funny side of things