Update Required To play the media you will need to either update your browser to a recent version or update your Flash plugin.
By VOA
17 November, 2012

A nickname is a shortened form of a person's name. A nickname can also be a descriptive name for a person, place or thing.

America's fifty states have some of the most historically interesting nicknames. 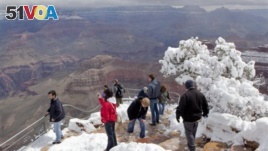 Alabama is known as the Heart of Dixie because it is in the very middle of a group of states in the Deep South. Dixie itself is a nickname for the American South. It started when Louisiana printed notes with the French word for "ten" on them. "Deece," or D-I-X, led to "Dixie."

Way up north, Alaska is called the Last Frontier for understandable reasons. Near the Arctic Circle, it was the final part of the nation to be explored and settled.

Arizona is the Grand Canyon State because of the famous winding canyon carved by the Colorado River. The southern state of Arkansas is the Land of Opportunity. The state legislature chose this nickname. Arkansas is rich in natural resources and has become a favorite place for older people to retire.

In a popular Spanish book, a fictional island called "California" was filled with gold. Sure enough, plenty of it was discovered in the real California, in eighteen forty-eight. This started a gold rush unlike any other in American history in the Golden State.

You would think Colorado would be known as the Rocky Mountain State. But its nickname is the Centennial State. That is because it became a state in eighteen seventy-six, exactly one hundred years after the nation declared its independence.

Connecticut is called the Nutmeg State after a spice. Connecticut Yankees, as people in this northeast state are called, are known to be smart in business. So smart that it was said they could sell wooden, meaning false, nutmegs to strangers.

Little Delaware is called the First State because it was the first state -- the first to approve the new United States Constitution.

The southern state of Florida likes to tell about its sunny days and fine beaches. So Florida is the Sunshine State. Florida's neighbor to the north grows some of the sweetest fruit in America. So Georgia is the Peach State.

Hawaii, far out in the Pacific Ocean, is the Aloha State. That is the friendly greeting that means both "hello" and "goodbye" in the native Hawaiian language. So, aloha for now. Next week we will tell you about the nicknames of more American states.