Update Required To play the media you will need to either update your browser to a recent version or update your Flash plugin.
By VOA
08 December, 2012

Today, we finish telling about the interesting nicknames that have been given to the fifty American states. 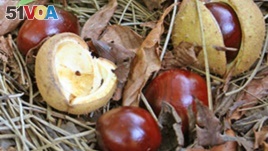 The state of Ohio is in the midwest. It is named the Buckeye State after a tree that produces nuts similar to chestnuts. 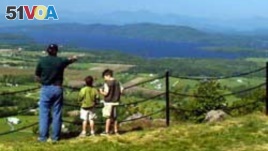 Vermont is the Green Mountain State
The Great Plains state of Oklahoma is called the Sooner State. That is because of a sale of land in eighteen eighty-nine.

Some people arrived in the territory to claim their land earlier than they were supposed to. They cheated and got there "sooner."


Pennsylvania's nickname is the Keystone State. Just as a keystone holds together a stone arch, Pennsylvania was seen as holding together the young American republic.

Pennsylvania is also sometimes called the Quaker State. Its founder, William Penn, and most of his followers, were members of the Protestant Quaker religion.

Rhode Island's nickname is Little Rhody because of its size. The state is smaller than the area around Los Angeles, California.

Tennessee got its nickname -- the Volunteer State -- because of the bravery of its citizens. They volunteered to join Tennessean Andrew Jackson to defend the city of New Orleans, Louisiana, against the British army in the War of Eighteen Twelve.

Texas is called the Lone Star State. It gets its nickname from the single star on its flag. This represents the short time Texas was an independent nation battling Mexico for self-rule.

The Beehive State of Utah has no more beehives than any other state. The nickname is from the Mormon Church's symbol for hard work.

Long ago, King Charles the Second of England added the colony's coat of arms to his shield. It joined his other dominions of England, Ireland, and Scotland.

West Virginia broke away from Virginia in the eighteen sixties. It is called simply the Mountain State for the ancient Appalachian mountains.

And we have saved perhaps the most American nickname for last. The western state of Wyoming was once an area where cattle were transported east. And where there are cattle, there are men -- and now women -- to move them. So Wyoming is the Cowboy State.