Update Required To play the media you will need to either update your browser to a recent version or update your Flash plugin.
By Anna Matteo
10 September, 2016


Hello and welcome to Words and Their Stories from VOA Learning English!

On this program, we explore the stories behind common expressions in American English.

Today, we talk about an object found in every home. We eat off them. We can also work at them. We play games on them and, at other times, we simply gather around them.

A table is often at the center of many activities. So it is not surprising that the word "table" is used in several common expressions. 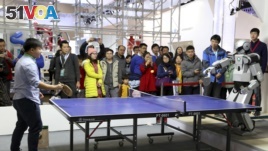 People watch as a robot (R) plays table tennis with a man during an demonstration at the World Robot Conference in Beijing, China, Nov. 2015. (FILE PHOTO)

Let's start with a very simple one: to table something.

George Bernard Shaw was a famous playwright. He reportedly said that "England and America are separated by the same language."

However, he may not have said that. It was the Irish writer Oscar Wilde who wrote years earlier in his 1887 story The Canterville Ghost, "... we have really everything in common with America nowadays, except, of course, language."

Regardless of who said it first, there is truth in this funny statement. Similar expressions can sometimes mean different things in the U.K and the U.S.

For example, the term to table means one thing in Britain, while it means the exact opposite in the United States.

When Britain's parliament wishes to consider an issue for discussion, members vote "to table it." On the other hand, when the United States Senate or House of Representatives votes "to table" a proposal, lawmakers decide to set aside the plan or even kill it altogether.

These differences led to misunderstandings between the two countries shortly after the United States entered World War II.

As the Americans and British began to develop joint military plans, the term "to table" usually required a clearer explanation. There were British proposals that the Americans were strongly opposed to. They did not even want to discuss them. Respectfully, they said, "Let's table them."

The British were happy to hear that. They thought the Americans were ready to give the proposals serious considerations. Boy, were they wrong!

For a time, the misunderstandings could be troublesome. But in time, the two sides grew to understand what each meant by the expression "to table." And communications between them improved.

So did their military situation. In time, the Allies turned the tables on Nazi Germany. After being on the defensive for a long time, allied forces moved forward to take the offensive on all battle fronts.

The Allies turned the tables on German forces and defeated them.

Hear another dialogue using the expression "to turn the tables" on this episode of English in a Minute.

The expression "to turn the tables" means to give opponents the same treatment they have been giving you. This saying comes from a popular 16th century card game.

In the game, a player might have found themselves in a worse position than his opponent. And so, turning the board, or table, around put the other person in the same position.

Now, let us hear this expression used in an everyday conversation.

A: Hey did you watch your boss's television interview about education reform?

B: Not yet. I hate watching her speak to reporters. Most of them are unfair and unprepared.

A: Well, your boss was ready for them. She turned the tables on all of them. She brought all her facts and knowledge about the issue to the table. She supplied hard evidence that proved their accusations wrong.

B: In that case, I'll watch that interview right away! Nothing is better than seeing the tables turn against unfair reporters.

If we put our cards on the table we lay everything out in plain view. Nothing is hidden. However, people who want to keep their plans secret, deal under the table. This expression is used to describe dishonest activities, such as cheating.

An employer who pays a worker under the table is paying them illegally without taking out taxes.

In American English, however, what you bring to the table is not limited to food or something to drink.

On the other hand, if someone does not bring anything of value to a gathering, for whatever reason, we can say that person brings nothing to the table.

You might ask, what does VOA Learning English bring to the table? We create stories and programs every day that hopefully help you improve your English.

Thanks for listening. I'm Anna Matteo.

sense of humor – n. a personality that gives someone the ability to say funny things and see the funny side of things