'Take' Is a Building Block in English

Update Required To play the media you will need to either update your browser to a recent version or update your Flash plugin.
By Anna Matteo
13 August, 2016


Now, the weekly program Words and Their Stories from VOA Learning English.

On this program, we explore the history and usage of common expressions in American English. And we give examples so that you can learn to use them yourself.

Sometimes we talk about a very simple term – like the word "take."

But "take" is not as simple as it sounds. In fact, the Oxford English Dictionary calls it one of the "elemental words of the (English) language."

Many expressions using the word "take" first appeared in American English years ago and have not changed at all. For example, the website Etymology Online says the saying take it or leave it was first used in the late 19th century. But you can find this phrase commonly used and in many different situations. 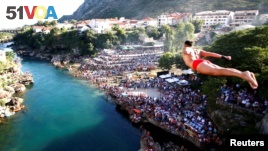 A man "takes a plunge" from the Old Bridge during 450th traditional diving competition in Mostar, Bosnia and Herzegovina, July 31, 2016.

Let's say your friend lost his job. He is angry and shouts at you for something unrelated. You can say to him, "Look I know you're upset. But don't take it out on me. I didn't fire you!"

If you take after someone, it means you seem to be like them in some way. If Felix is very much like his father, you could say he takes after his father.

If you are simply taken by someone, you either show complete respect for or are totally in love with the person. For example, "She is really taken with the new man in the office. He is all she talks about!"

"Take" can also be used as a noun. And it has several meanings.

Take can be money collected during a performance of something. If you are a criminal, your take is your share of what was stolen.

But when using the word "take," the situation is very important. If I ask you what your take is, I am asking for your opinion about something. For example, "give me your take on this year's election."

Combining the verb "take" with any number of prepositions is where the fun really starts.

Let's start with the term take away. Take away when used as a combination noun is what you learned from something. For example, "What was your take away from the meeting today?"

Take off means something really progressed quickly. You could say, "Her career in politics really took off when she moved to Washington, D.C."

Yet the adjective take-out is very different. "Take-out" describes the food you buy from a restaurant and bring home to eat. Chinese take-out meals are very popular in the United States.

However, if are tired of spending money on Chinese take-out, you can take up Chinese cooking. This means you are learning how to do it. You can also take up an instrument or take up a hobby like painting.

Change the order of those two words and you have "uptake." Uptake is the process by which something is taken in by the body or a plant. But that is not the way we often use it in every day speech. "Uptake" also means the ability to learn new things, to understand what is happening or being said – as in this example:

Hello, miss. Fill out this form and give me your health insurance card. The doctor will see you shortly.

You want me to fill out my health insurance and give it to the doctor?

No. Just complete this insurance form and give ME the form.

Sorry, I'm a little slow on the uptake. I don't know what is wrong with my brain today.

You can also use the expression "uptake," like this: "He's kind of slow on the up-take." This means he is slow to understand a situation.

If all this information is too much, you might want to take five, or take a break.

Take five is what actors, dancers and musicians say when they want to take a break. But these days anyone can say "take five" if they need a little rest from work. Word historians say this expression was first used in the late 1920s. It may have come from the fact that smoking a cigarette takes about five minutes.

But please do not think that we are expressing support for smoking. If we did that, we would have to take on anti-smoking health activists around the world.

To take on has several meanings.

In our example, it means to deal with someone or something as an opponent. You can also take on new responsibilities. Then the phrase means to begin performing or to deal with something, such as she took on the job of manager after Steve resigned.

But to take on can also mean to get control of or to become like something, as in this example: "On the day of the celebration, the boring city's town center took on the air of a happy carnival."

You can add the word "take" to word combinations and create new expressions.

Unless that friend takes you for a ride. If you are taken for a ride, you are fooled by someone.

If you take a plunge, you act bravely and with determination. This expression began in the late 1800s. And if you take a back seat to someone or something you have assumed the secondary position of importance to them.

The criminal world of the 1930s is responsible for at least two "take" expressions.

To take the rap means to accept punishment for something you didn't do. And to be on the take means to take money from criminals.

And if you take the money and run, you are a criminal.

If someone tells you to take it easy, they want you to calm down. Taking it easy can also mean to simply relax and do nothing.

So, do you see what we mean? The word "take" has so many uses. You can take our word for it. That means you can trust us.

What is your take on this story? Let us know in the Comments Section.

Anna Matteo wrote this story for VOA Learning English. George Grow was the editor. The song at the end is the pop band A-Ha singing "Take on Me."

compromise – n. a way of reaching agreement in which each person or group gives up something that was wanted in order to end an argument or dispute

hobby – n. a pursuit outside one's regular occupation engaged in especially for relaxation