Shhh! The Walls Have Ears!

Update Required To play the media you will need to either update your browser to a recent version or update your Flash plugin.
By VOA
02 September, 2017


Now it's time for Words and Their Stories, a program from VOA Learning English.

On this program, we explore common words and expressions in American English. Sometimes we tell you their origins, but we always teach you how to use the words in conversation.

Today, we are going to talk about something bad; in other words, something naughty.

Have you ever listened to a private conversation? Maybe you were standing by a door or in a hallway and you heard people talking about someone else you know. And you could not help it. You paused ... you perked up your ears ... and you listened.

You knew, of course, that these people were not speaking to you. They did not invite you to be part of their conversation. You invited yourself. You eavesdropped.

To eavesdrop means you secretly listen to the conversations of others. Some types of people are very good at eavesdropping. Nosy people, people who like to gossip and spies are all good eavesdroppers. The only difference among my examples is that spies get paid and could get killed for getting an earful. 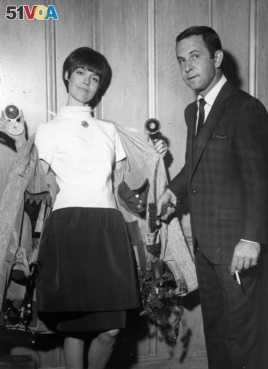 Barbara Feldon and Don Adams played spies in the television comedy "Get Smart." Here they show their weapons and gadgets. (Los Angeles, 1965.)

Originally, however, the word "eavesdrop" had nothing to do with spying or listening to private conversations.

When it was first used in the 1600s, "eavesdrop" was the water that fell, or dropped, from the eaves of a house.

These days you can be standing anywhere to eavesdrop. The word simply means "to listen secretly to something said in private."

English has another expression related to eavesdropping and the home: the walls have ears. This means be careful what you say as there might be people listening.

Some word experts say this expression may come from story about an ancient Greek ruler (430–367 BC) who had an ear-shaped cave cut and connected between the rooms of his palace. This allowed him to listen to conversations in other rooms.

This form of eavesdropping became common practice with rulers from many cultures. In English, the phrase "the walls have ears" was first recorded in its present form in the mid-1600s.

Now, if you like (or hate) learning English phrasal verbs, there's a great one for eavesdropping – to listen in on. Usually our phrasal verbs have only one preposition. Not this one. It has two!

When you listen in on something, you listen to people speaking without joining in, usually secretly.

Now, maybe you were minding your own business. Maybe you just happened to have overheard a private conversation. Overhearing is more innocent than eavesdropping. You can overhear something by being in the wrong place at the right time.

Now, let's listen in on two people talking to learn how to use these words and expressions in a conversation. And it's okay. We're not eavesdropping. I've given you permission!

So, Amy, I was listening in on the management meeting today. Our manager said that he's putting your project on hold. You're thinking about leaving the company, aren't you?

I haven't told anyone that except Ann Marie. Did she spill the beans to you?!

No. She didn't tell me anything. I just happened to overhear you two talking in the cafeteria yesterday.

Were you eavesdropping on our conversation, Alex?!

No! I was walking behind your table and accidentally overheard what you guys were talking about. Honest.

Alex, it was a really long conversation. Unless you were purposefully listening in on us I don't see how it could have been an accident.

Okay, I was standing behind your table. When I overheard you and Ann Marie talking about your project my ears perked up. So, I stayed there and listened for a little while ... okay, for a long while.

Alex, you're such a snoop! Look, don't tell anyone. I didn't accept the other job offer yet. So no one knows, okay?

I'd like to know how you talk about listening to private conversations in your language? Let's talk in the Comments Section ... where the whole world is able to eavesdrop!

naughty – adj. sometimes used humorously to describe an adult who does something slightly wrong or improper

gossip – v. to talk about the personal lives of other people

eave – n. the lower border of a roof that overhangs the wall —usually used in plural

perk up your ears – idiomatic phrase : to listen more closely : to lift (the ears) in a quick or alert way, often used figuratively of a person <I perked up my ears [=I began to listen closely] when I heard his name mentioned.>

spill the beans – idiomatic phrase : to let secret information be known : to give away a secret or surprise