Update Required To play the media you will need to either update your browser to a recent version or update your Flash plugin.
By Anna Matteo
01 July, 2017

On this program we explore the origins of common expressions in American English and, more importantly, how to use them.

We really want to do an excellent job teaching and entertaining our audience. So, we try to do this program as best we can every time. 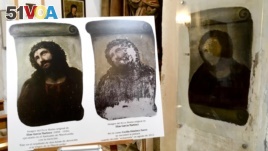 FILE - View of the deteriorated version of 'Ecce Homo' mural by 19th century painter Elias Garcia Martinez, right, next to a copy of the original, left, at the Borja Church in Zaragoza, Spain, Wednesday, March 16, 2016. An attempt to restore the original fresco did not turn out well. (AP Photo/Javier Vinuela)

But sometimes we make mistakes. We err.

Making a mistake is not pleasant, but it is natural. One well-known saying begins, "To err is human..." In other words, making mistakes is part of being a person.

But what about those who suffer because of someone else's mistake?

The saying answers this question, too. It says, "...to forgive (is) divine."

That means that excusing others for their faults makes us a little better than just being human. The act is god-like.

This popular saying is an old one. It comes from the 18th century English poet Alexander Pope. He wrote about forgiveness in an essay titled "An Essay on Criticism."

However, Merriam Webster's Online Dictionary says the original idea is older than that. In 1678 Thomas Jones wrote, "To err, is human; to recover, is Angelical; to persevere is Diabolical." But this saying wasn't as memorable and, therefore, it just didn't stick.

"Err" comes from the Latin word "errare," meaning "to stray or wander." Related words, such as errant and erroneous, have the same Latin origin.

But the noun form of "err," error, appears in many American English expressions.

For example, human error is often the reason police give for a preventable – but unplanned – accident. If a train crashes because the driver fell asleep, that crash was caused by human error.

But some errors or mistakes are nobody's fault directly.

Let's say a plane crashes. An investigation proves that the crash was caused by an undetectable engine problem. There was nothing the pilot could have done differently to prevent the crash. In this case, the cause of the crash was not pilot error.

But that is enough talk about crashes.

Let's say this pilot is on the runway preparing to take off. Suddenly, a bad storm begins. She could take off but decides to wait until the storm passes. We could say she wants to err on the side of caution. This simply means that of all the options available, you choose the safest one.

If you feel sick one day but feel fine the next, you may err on the side of caution and stay home from work.

You can err on the side of other things. For example, let's say your child's school asks for a money donation to build a new playground. You don't know how much other parents are giving. So, you err on the side of generosity and give more than you think is expected.

Here's another example. If a person has treated you badly in the past, you can err on the side of being polite to them.

Acting politely is the right thing to do. And it's good for another reason, as well. When you are nice to people who have treated you badly in the past, they may re-think their bad behavior. They may see the error of their ways.

We often use this phrase when we want to say that a person has realized the things they have done wrong. But be warned – we don't use this phrase lightly. The "error" in this expression is usually a serious problem with a person's character or behavior that may cause trouble.

This expression also means the person became aware and then fixed the problem.

Let's go back to the pilot.

Imagine she had a bad habit of working too hard. She would lie about her long flight assignments so that she could fly even more routes. However, one day she realized that she was putting the passengers in danger. She saw the error of her ways and stopped.

If her supervisor had caught her and forced her to change her work habits, you would not use this expression. And you would not say the supervisor saw the error in her ways. It is always a self-discovery.

Now, talking about self-discovery brings us to scientific discoveries.

Scientists are very careful people, but scientific research is full of errors. Scientists know this. So, they sometimes say that their findings have a margin of error. That margin, or amount, shows how accurate they think their answer really is.

Another scientific term that we use in any part of our lives is trial and error. Trial and error means you find the best way to do something by trying many ways and getting rid of the ways that failed.

Sometimes here at VOA, creating new programs for our listeners involves some trial and error. Sure, it is helpful to know which programs in the past were popular. But times change and so do audiences. We need to be willing to try new things -- that's the trial part -- and fail, or make an error.

If we do fail, I hope you will err on the side of forgiveness and give us another chance.

And that's the end of Words and Their Stories.

divine – adj. of, relating to, or proceeding directly from God

stick – v. to remain in a place, situation, or environment

error – n. something that is not correct : a wrong action or statement

caution– n. care taken to avoid danger or risk : a careful attitude or way of behaving