Why Is 'Tongue-in-Cheek' So Funny?

Update Required To play the media you will need to either update your browser to a recent version or update your Flash plugin.
By VOA
19 May, 2018


Now, it's time for Words and Their Stories from VOA Learning English!

On this program, we explore the meaning and usage of everyday expressions in American English.

Today, we will talk about two parts of your head: the tongue and cheek. When you put them together, you get something funny!

The American writer Mark Twain was an expert at making tongue-in-cheek comments.

Another famous humorist was Will Rogers. He was born in 1879 in what is now Oklahoma. He was part Cherokee and was known as "the cowboy philosopher." 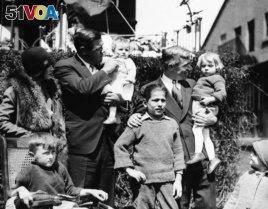 Rogers' warm humor made him one of the best-loved performers of his generation. During his long career, Rogers did a little of everything. He was an actor, both in the theater and in movies. He had a weekly radio show and also wrote stories for a newspaper.

This tongue-in-cheek comment from Rogers is as meaningful today as it was when he said many years ago:

"Everything is changing in America. People are taking the comedians seriously and the politicians as a joke."

Now, we all know that no one can know everything. But that fact doesn't sound very interesting, funny or witty. Will Rogers stated that truth in his typical tongue-in-cheek way when he said, "Everybody is ignorant only on different subjects."

But how did putting your tongue in your cheek come to mean a kind of twisted, oftentimes truthful, humor?

Some websites say this expression dates back to the 18th-century England. One site says that it first meant a common facial expression used to express dislike or contempt. These days, the contempt is gone and in its place are terms like irony. An irony is when you say the opposite of what you mean, usually to be funny.

Another website says that people may have stuck their tongue in their cheek to keep from smiling or laughing.

However, when it comes right down to it, you should not take a tongue-in-cheek comment at face value. It starts to mean one thing but then ends by meaning something completely different. That is what makes it so funny.

Tongue-in-cheek humor is often successful when it includes the speaker in a funny critique or situation.

In 1962, President John F. Kennedy famously did this at a dinner celebrating 49 American Nobel Prize winners.

He said: "I think this is the most extraordinary collection of talent, of human knowledge, that has ever been gathered together at the White House ... with the possible exception of when (former President) Thomas Jefferson dined alone."

In this way, tongue-in-cheek humor can be self-deprecating. It is effective when you want to make fun of yourself a bit.

And this brings us to music.

For some reason, country & western music has a long history of producing tongue-in-cheek songs. With titles like "She Thinks My Tractor's Sexy,'" "Queen of My Double Wide Trailer" and "Bubba Shot the Jukebox," it is clearly a type of music that does not mind poking fun at its own culture and lifestyle.

In the 1970s, Mac Davis became one of the biggest names in country music. He wrote songs for Elvis. And because he was so handsome also got into acting. Then in 1974, he had everyone laughing with his tongue-in-cheek song making fun of his own life.

"It's Hard to Be Humble" became an instant hit.

And that's Words and Their Stories. Out of all the programs here at Voice of America, this is one of them. I'm Anna Matteo.

This last sentence is a bit tongue-in-cheeky. Do you know why? Let us know in the Comments Section.

twist – n. an unexpected or strange occurrence : something new created by changing something slightly

face value – n. Something that is taken/accepted at face value is regarded as true or genuine without being questioned or doubted

self-deprecating – adj. meant to make yourself or the things you do seem unimportant

tractor – n. a large vehicle that has two large back wheels and two smaller front wheels and that is used to pull farm equipment

trailer – n. a vehicle that can be pulled by a truck or car and that can be parked and used as an office, vacation home, etc.

jukebox – n. a machine that plays music when money is put into it

humble – adj. showing that you do not think of yourself as better than other people