Update Required To play the media you will need to either update your browser to a recent version or update your Flash plugin.
By Phil Dierking
17 March, 2018


Immigrants working at a large, remote farm in the state of Kansas are forced into hard labor to pay back the farm's cost of illegally bringing them into the country, an Associated Press report says.

The AP spoke with former workers at the Fullmer Cattle ranch. The company raises cows for dairy companies across four states.

Esteban Cornejo is a Mexican citizen and an undocumented immigrant in the United States. He spent eight months cleaning out calf pens and doing construction work. He left Kansas in November after paying back his loans. He thinks his loans totaled nearly $7,000.

One of Cornejo's paychecks shows he worked about 15 hours a day, with Sundays off. He earned $10 an hour. Before taxes, his pay was $1,828.34. But the company took away $1,300 from his pay because of a "cash advance repayment." Cornejo said this was to return the loan for smuggling him into the country. 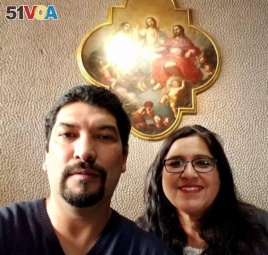 In this Dec. 2017, photo provided by Rachel Tovar, right, poses with her husband Arturo Tovar at a Catholic cathedral in Mexico City. Rachel Tovar, a former worker of the Fullmer Cattle Co., a western Kansas calf ranch, told the Associated press that the ranch forces immigrants to toil long days to work off loans from Fullmer Cattle Co. for the cost of smuggling them into the country. (Photo courtesy Rachel Tovar via AP)

Rachel Tovar also used to work at the ranch. She told the Associated Press, "It's like slavery what they do to those poor people."

Former workers say they received no holidays, health insurance or overtime pay. They even had to buy their own safety equipment.

Dean Ryan, the company's lawyer, said in an email that the former workers' accusations "are simply not true."

"There was no smuggler's fee and has never been," Ryan wrote. He added that there are "plenty of people willing to work in western Kansas without having to ‘import' them."

Ryan said company policy is to give pay advances to workers who have no credit history. He said those loans are made so employees can buy vehicles or homes.

President Donald Trump's administration has made an effort to reduce the number of immigrants living in the country illegally. But it has focused less on companies that employ them or possibly smuggle them into the United States.

The case in Kansas brings attention to exploitation that immigrant workers may face.

Under U.S. law, employers do not have to give agricultural workers overtime pay. Erik Nicholson, national vice president for the United Farm Workers union, said it is not unusual for employers to hire immigrant farm workers.

Rachel Tovar's husband, Arturo, was a Fullmer manager for 11 years. He was living in the country illegally. He described the company's smuggling process to the AP.

When the company needed workers, Arturo asked employees if they knew someone who wanted to work in the United States. Then, Arturo was told to call the company's smuggler, who lived in Piedras Niegras, Mexico.

The smuggler would then begin to make preparations.

The company would give Arturo Tovar a check, which he would exchange for cash. He would give the smuggler some of the money before he transported the immigrants. The smuggler would get the rest of the money after the immigrants arrived San Antonio or Houston, two cities in Texas. There, the workers would be picked up and taken to the ranch in Kansas.

A history with illegal immigrants

Fullmer Cattle's calf-feeding operation is outside of Syracuse, Kansas. It is about 25 kilometers from the Kansas-Colorado border.

The company says it raises thousands of cows for 18 dairies in Texas, Kansas, Colorado and South Dakota. Fullmer Cattle says on its websites it has "lower labor costs."

The ranch's owner is Que Fullmer. In 1998, law enforcement officials carried out an immigration raid at his ranch in Chino, California. They found workers living in what a California labor official described as "economic slavery."

Fullmer admitted guilt in 1999 to hiding immigrants in the country illegally. He was sentenced to six months of home detention. Court records also show Fullmer was ordered to pay a $10,000 fine and perform 500 hours of community service.

The Kansas ranch's lawyer noted that, because of Fullmer's past, the company takes "extra care" not to hire workers who are in the country illegally.

This story was originally written by Roxana Hegeman for the Associated Press. Phil Dierking adapted it for VOA Learning English. Ashley Thompson was the editor.

Do companies in your country hire foreign works illegally? What are their working conditions like? We want to hear from you. Write to us in the Comments Section or on 51VOA.COM.

cash - n. money in the form of coins and bills

dairy - n. a place where milk is kept and butter or cheese is made

exploit - v. to use (someone or something) in a way that helps you unfairly

fee - n. an amount of money that must be paid

focus - v. a subject that is being discussed or studied

hire - v. to give work or a job to (someone) in exchange for wages or a salary

smuggle - v. to move (someone or something) from one country into another illegally and secretly

trailer - n. a long platform or box with wheels that is pulled behind a truck or car and used to transport things