Working to End Violence Against Women, Girls in Bangladesh

Update Required To play the media you will need to either update your browser to a recent version or update your Flash plugin.
By Amy Yee
04 June, 2015


In Bangladesh, domestic violence is a serious problem for women and girls who live in poverty. These women and girls are beaten or attacked in the one place they should feel safe -- their homes. It is difficult to change this situation because of deep-rooted customs. But a group of non-profit organizations is working to bring change to thousands of the country's poor.

In a slum area of Dhaka, 10 people sit in a narrow street between small homes. Women with colorful shawls on their heads sit next to four men. They listen as two health workers, both women, talk about birth control methods and diseases passed through sex. The health workers also show photographs of how the diseases affect the body.

The surprisingly open discussions are part of a program called "Shokhi." Its goals are to improve health and reduce domestic and sexual violence in 15 slums in Dhaka. Shokhi is a project of several non-profit organizations. It offers legal advice and health services. Women can find these services in small offices throughout 15 neighborhoods. The program also offers counseling services and community information meetings. At those gatherings, people can learn about subjects like conflict resolution and how to control anger. 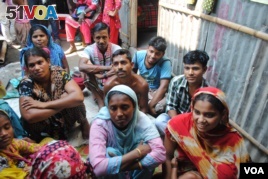 Volunteers in a slum in Dhaka listen to a lecture on reproductive health. (Amy Yee for VOA News)

The people taking part in the Shokhi program all volunteered to be "change makers." They talk with small groups in their communities about ending violence against women. There are about 1,500 of these change makers. They received training from about 45 professional community workers.

Rashida Begum is a 32-year-old tailor, making and repairing clothing for other people. She became a change maker more than a year ago. Years ago, she said, her husband often hit her. But after attending Shokhi's programs, her husband has not hit her in a year.

"Before, if anything happened in the home, he got very angry at me and would beat me. Now, he's working with this group and getting a lot of information, that you shouldn't do this," she said.

Another important step for Ms. Begum was learning about her legal rights. She had her husband arrested after he illegally married a second wife. Later, he ended that marriage and returned to Ms. Begum and her family.

In Bangladesh, violence against women is widespread, even in their own homes. Physical and emotional abuse by husbands is common among the poor.

In urban slums, women and girls suffer from high rates of violence and poor sexual and reproductive health. Girls who marry early have even more problems. Bangladesh has the world's fourth highest rate of child marriage. Here, 65 percent of young women marry before the age of 18.

Through Shokhi, men and women are learning that abuse is unacceptable and illegal. In small group meetings, many women and girls are learning about their rights for the first time.

Sara Hossain is head of "Bangladesh Legal Services Trust," one of the organizers of Shokhi. She says that providing information is very important to her work.

"It's not just telling them you that you have a right not to be beaten, but where to go if this happens, what you can do, who will help you," she said.

Three other nonprofit groups are involved with the program. "Marie Stopes Bangladesh" is a nonprofit organization that deals with women's reproductive health issues. "The Bangladeshi Women's Health Coalition" and "We Can" both work against domestic violence.

Shokhi is similar to an earlier program in Dhaka called SAFE. Some of the same nonprofit groups directed that program from 2012-2013.

Population Council, a U.S. non-profit research center, and ICDDRB, a public health institute, looked at the results of SAFE. They studied more than 12,000 people in the program. They found that SAFE reduced violence against women and girls. When men were included in activities, there was even less violence.

People at the meetings say the sessions can make them feel stronger. One female change-maker said, "Public action is the best action. The police can't do it. Before, if something happened in the home next door, you ignored it. Now you can tell them, 'You can't do that.'"

Since the program started in 2013, it has directly given services and information to 10,000 people. It has reached tens of thousands more indirectly through media campaigns and street theater. Shokhi aims to reach 500,000 people by 2018.

Involving men in awareness sessions and as change makers led to a greater reduction in violence. That finding comes from surveys of the earlier program in Dhaka. Male change makers lead about one third of the community groups.

On a hot spring day, another group of 20 slum residents sat on the floor of a school in a slum area of Dhaka called Mohammadpur. Amid the women were five men. They were starting their three-day training to become change makers.

Mahubab Alam is a 45-year-old night security guard. He attended the training during his off-duty hours. He explained why he volunteered to become a change maker. "We think we live in an undignified way. We have an opportunity to change this," he said.

It is not easy to stop violence against women and girls in Bangladesh. But Shokhi is raising hopes that change can happen, from the ground up.

Amy Yee reported on and wrote this story. Jill Robbins adapted it for Learning English. George Grow was the editor.

domestic - adj. relating to or involving someone's home or family

slum - n. an area of a city where poor people live and the buildings are in bad condition

reproductive - adj. relating to or involved in the production of babies

Now it's your turn. Do you volunteer to help in your community? What social issue do you want to change in your country? Are there groups working to reduce domestic violence in your area? Write to us in the comments section.