Working to Save Lives When a Tsunami Strikes

Update Required To play the media you will need to either update your browser to a recent version or update your Flash plugin.
By Mario Ritter
03 November, 2017

Tsunami is a Japanese word for a long, destructive ocean wave caused by an undersea earthquake.

The goal of the observance is to learn from disasters of the past and to prepare for the future.

Two tsunamis in the last 15 years have changed the way people around the world think about these destructive events. 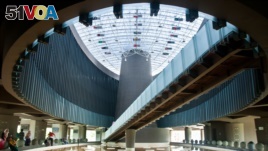 The Tsunami Museum honors victims of the tsunami in Aceh, Indonesia in 2004.

On December 26, 2004, a magnitude 9 earthquake near the coast of Indonesia caused tsunami waves that struck the coasts of four countries.

An estimated 230,000 people died and costs were in the billions of dollars.

One school girl from a Pacific island nation described a tsunami this way: "like a monster, it destroys everything."

Bulgaria's U.N. Ambassador Georgi Velikov Panayotov was on vacation with his wife in Thailand in 2004 and survived the tsunami.

He warned there is nothing you can do to stop a tsunami.

But he said, "What we can do is build early warning systems and, of course, educating the population about the devastating power of the tsunami wave."

After the event in Indonesia, many countries believed they were prepared if a tsunami struck.

Then, on March 11, 2011, a magnitude 9 earthquake struck northeastern Japan. It was the most powerful earthquake ever recorded in that country.

More than 18,000 people died. The tsunami also caused serious damage to the Fukushima Daiichi nuclear power center on the island of Honshu. At the time, the nuclear center was Japan's biggest.

The human cost of the disaster was huge. The tsunami of 2011 also is one of the most costly disasters in history. Several nuclear reactors were severely damaged and leaked radiation. Clean up efforts continue to this day.

Japan's U.N. Ambassador Koro Bessho said, before the 2011 earthquake, "People thought that we were prepared for it."

But he said officials had expected an event that "hits every 100 years and the earthquake was of the size of possibly every 500 years or one thousand years."

The two events caused people in the Pacific and Indian Ocean areas to study and improve preparedness for disasters.

This led to the Sendai Framework for Disaster Risk Reduction in 2015 in Sendai, Japan.

The agreement was a U.N. effort to raise awareness about disaster risks and to urge countries to assess how well they were prepared for them.

Willem Rampangilei is head of the Disaster Management Agency in Indonesia. He said Indonesia passed a law on disaster management after the 2004 tsunami. It led in 2008 to the creation of his agency.

"Our responsibilities include mitigation and preparedness, emergency response, as well as post-disaster rehabilitation and reconstruction," he said.

After the 2004 waves, a Tsunami Warning System was put in place. It provides three regional watch centers in India, Indonesia, and Australia. There also are 26 national tsunami information centers throughout the area.

As a result, Banda Aceh received warnings eight minutes after an earthquake in 2012. No deaths were reported.

Preparedness has spread beyond Asia. There are now early warning systems in place for the Caribbean Sea, the Northeast Atlantic Ocean, the Mediterranean Sea and surrounding areas.

This week, the U.N. Education, Scientific and Cultural Organization, or UNESCO, held an early warning exercise involving 15 countries in the northeast Atlantic and Mediterranean. The group is studying local plans to deal with a tsunami emergency.

In countries where there is a risk of a tsunami, officials are aiming to teach children from an early age so they know how to react. 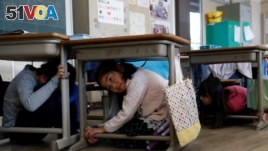 School children take shelter under desks during an earthquake simulation exercise in an annual evacuation drill at an elementary school in Tokyo, March 10, 2017.

Children are taught to shelter in place until an earthquake passes. Then, they are to go with classmates to higher ground away from coastal areas and possibly deadly sea waves.

Japan is sharing its knowledge by assisting with evacuation exercises in schools in 18 countries. Next week, Japan is holding an event for high school students from 25 nations. It is aimed at teaching about tsunami risks and life-saving measures in such an event.

Japan's Tohoku University joined with Japanese companies to publish a report on the risks of tsunamis around the world. By studying historical records, researchers found big differences between tsunamis. They also found that the height of a wave had little to do with its destructive force.

Improved building codes can save lives

Countries that have been hit by tsunamis have learned that better building requirements can save lives and limit damage.

Chile is a country that has learned this first hand. In February 2010, an 8.8 magnitude earthquake struck the country also causing a powerful tsunami. About 525 people died.

Four years later, another earthquake of 8.4 magnitude, struck. This time, 15 people were killed in the quake, but no one died in the following tsunami.

Diplomat Jorge Iglesias Mori said measures to improve building standards had been carried out in the four years. "Building codes were strengthened," he said. He added that the country put more resources into early warning systems, education, and exercises.

He also said Chile worked with Japan in sharing knowledge and experience.

magnitude –n. a measure of the force of an earthquake

awareness –n. the state of knowing about something

assess –v. to study and make a judgment

mitigation –n. making an effort to reduce the bad effects of something, like a flood or earthquake

rehabilitation –n. a process of recovery, bringing someone or something back to its former state or health

evacuation –n. the act of moving people out of a place because of some emergency