Update Required To play the media you will need to either update your browser to a recent version or update your Flash plugin.
By Mario Ritter
18 April, 2015


Slowing economic growth around the world is endangering the World Bank's goal of ending extreme poverty by the year 2030. That is what World Bank President Jim Yong Kim said recently. Mr. Kim said the goal remains within reach. But he thinks extreme poverty will disappear only if world leaders and financial and development agencies do their part.

What exactly is extreme poverty? The United Nations says extreme poverty is a condition in which basic human needs are not being satisfied or met. These needs include having clean drinking water, food and an education.

Jim Yong Kim says there is good news. He says the world has made some progress toward reaching the goal. 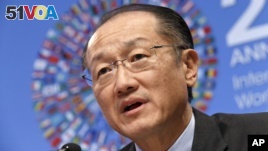 "Over 25 years, we've gone from nearly two billion people living in extreme poverty to fewer than one billion."

Even with this progress, nearly one billion people continue to live on less than about $1.25 a day. Slowing economic growth in industrial and developing economies is affecting the fight against extreme poverty.

Mr. Kim suggests that one solution is to partner with new financial institutions such as the Asian Infrastructure Investment Bank and the New Development Bank.

"We at the World Bank Group see these development banks as potentially very strong allies in tackling the enormous challenge of bringing much needed infrastructure to the developing world."

Banking coalitions could help identify financing for transportation and other infrastructure needs that the World Bank alone cannot provide. Amy Studdart is with the Center for Strategic and International Studies in Washington, D.C.

"There's a huge infrastructure gap in Asia. The World Bank itself estimates that it was $2.5 trillion worth of investment that needs to happen in South Asia and South East Asia along."

Many people are concerned that new lending agencies will reduce the influence of existing ones like the World Bank. But Mr. Kim says the issue is not influence.

"The fundamental issue for us is, your enemy cannot be other institutions. Your enemy has to be poverty."

The World Bank is expected to consider those issues when world leaders meet at the United Nations later this year.

Reporter Mil Arcega prepared this story for VOA. Mario Ritter wrote it for Learning English. George Grow was the editor.

tackle – v. to deal with a difficult problem; in sports, to bring someone down to the ground

gap – n., the space between two people or things; a space from which something is missing