World Bank to Invest in Education for Girls

Update Required To play the media you will need to either update your browser to a recent version or update your Flash plugin.
By Jim Dresbach
14 April, 2016


The World Bank Group plans to invest close to $2.5 billion over five years in education projects to help girls between the ages of 12 and 17.

The bank says that about 75 percent of these investments are expected to come from its program for the world's poorest countries. Most of the countries are in South Asia and in Africa, south of the Sahara. Those areas reportedly have the highest number of out-of-school girls.

The investments were announced by Jim Yong Kim, president of the World Bank Group. 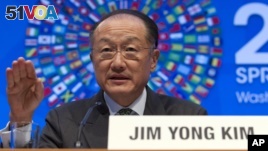 "Empowering and educating adolescent girls is one of the best ways to stop poverty from being passed from generation to generation," Kim said.

He spoke Wednesday at the spring meetings of the International Monetary Fund and the World Bank. The meetings are taking place through Sunday in Washington, D.C.

She said the investments in education will benefit millions of girls. The First Lady also said it will help build the workforce in each country.

The World Bank says a total of almost 62 million girls around the world are not in school. A World Bank study found that a woman's lifetime earnings increased by 18 percent for every year she attended school.

The bank said its investments will support efforts to provide a quality education in secondary school and financial assistance to adolescent girls. The money will help to finance clean drinking water and toilets in schools.

Jim Dresbach adapted this story from VOANews. Additional material came from The World Bank Group. George Grow was the editor.

empowering – v. to give power to someone

adolescent – n. a young person who is developing into an adult