Update Required To play the media you will need to either update your browser to a recent version or update your Flash plugin.
By Christopher Jones-Cruise
15 April, 2016


Information from the newly-released "Panama Papers" is hurting public trust, according to a top World Bank official.

Sri Mulyani Indrawati is the bank's Managing Director. She warns the information may make everyday citizens less willing to pay taxes. She says this could reduce public money to pay for roads, schools or other government services.

Mulyani is calling on policymakers to cooperate by developing stronger laws. 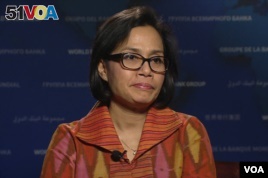 The information came from documents stolen from a law firm in Panama. They show how wealthy people and government leaders around the world hide money and avoid paying taxes.

Sri Mulyani says the idea of unfairness damages public trust. She says it could also lower the amount of money governments collect and could hurt the economies of countries that need to grow.

She says that when everyday citizens learn that their leaders and the very rich have money in foreign banks, they ask why. And they ask if there is a good reason for people to move their money overseas or whether they are hiding something.

Tom Cardamone works at the research and advisory group Global Financial Integrity. He says the money sheltered in Panama represents a large part of the economy of some countries.

Sri Mulyani says that for real changes, countries will have to work closely together. "Without international cooperation, it is going to be very hard to actually chase this tax avoidance," she said.

Mulyani notes that slower growth around the world is worsening economic pressures in many nations, especially in the 40 weakest.

She says work has begun to improve conditions so that businesses create more jobs, and governments can provide basic public services and rebuild social services in countries affected by conflict. She says many of these efforts involve programs to help young people learn job-related skills.

illicit – adj. not allowed by law; unlawful or illegal

siphon out of – expression to take and use (something, such as money) for your own purpose

according to – preposition as stated, reported or recorded by (someone or something)

law firm – n. a group of lawyers operating in the same office or offices; a business organization operated by lawyers

basic – adj. forming or relating to the most important part of something