Update Required To play the media you will need to either update your browser to a recent version or update your Flash plugin.
By Hai Do
13 December, 2018


The World Cup, the movie "Black Panther," Meghan Markle and the deaths of several famous people are among the most popular Google searches of 2018.

The search engine company this week released its yearly ranking of search terms that had the highest growth in comparison to the year before.

The World Cup final between France and Croatia is at the top of Google's list.

The second- and third-most popular search topics were for the young musicians Avicii and Mac Miller. Both died in 2018. Sweden's Avicii started his music career at the age of 16. He retired after 10 years and killed himself in April at the age of 29. American singer Mac Miller died of a drug overdose in September. He was only 26 years old. 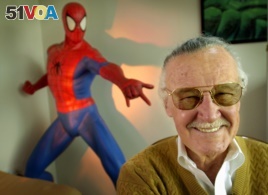 Stan Lee took the fourth spot on the list. He was the creator of famous comic book characters like Spider-Man, the Hulk and Black Panther. He died in November at the age of 95.

"Black Panther" was the fifth-most searched term. The superhero movie broke box office records around the world. It was also the most-tweeted-about movie ever.

Bourdain and Spade both killed themselves in June -- within the same one-week period. Their suicides led to strong calls for more mental health treatment and suicide prevention efforts.

Hai Do wrote this story for Learning English. Ashley Thomson was the editor.

overdose - n. an amount of drug that is too much and usually dangerous

topic - n. someone or something that people talk or write about

personality - n. a person who is famous

fashion - n. a business of creating and selling clothes