Update Required To play the media you will need to either update your browser to a recent version or update your Flash plugin.
By Ashley Thompson
26 June, 2018

Lucy Zelic is an Australian television presenter. She is currently covering the World Cup in Russia for Australia's Special Broadcasting Service or SBS.

It is her second time covering the World Cup.

Over the weekend, Australian viewers and social media users began criticizing her coverage. The reason? She makes a clear effort to correctly pronounce the names of soccer players from each of the 32 countries in the World Cup tournament. 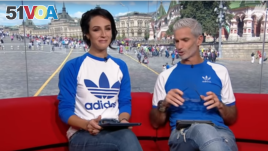 Not everyone supports her efforts. Some on social media have described Zelic's pronunciation of names as "annoying" and "insufferable." They accuse her of using a "fake accent" to say players' names.

On Monday night, Zelic and her co-host, Craig Foster, spoke on air about the growing criticism. A video of their talk has been published on Twitter, YouTube and other sites.

The two commentators said SBS is "about respecting every single culture." They said SBS commentators have a long tradition of pronouncing names of players and countries correctly. Foster said, "If you can't get someone's name right, it says that you've got no regard, you haven't done the work, you haven't tried."

Zelic became emotional on air. She said, "You're not pronouncing it [names] for anyone except the nation you're covering and out of respect for them -- you're pronouncing it for them."

Zelic herself is multilingual. Her parents are immigrants from Croatia. As the Guardian newspaper reports, her father came to Australia by boat. He arrived not knowing a word of English.

Zelic said that other immigrants in Australia have written her to thank her for her pronunciation efforts.

She said, "When I have had Colombians, for example, write to me and say ‘I've been living in Australia for 37 years, and constantly having my name mispronounced has always been a difficulty for me. To have it pronounced correctly is really quite touching.'"

fake - adj. not true or real

regard - n. care or concern for someone or something — often + for or to

entertain - v. to perform for (an audience)