World Leaders Gather for Climate Talks with ‘Everything at Stake’

Update Required To play the media you will need to either update your browser to a recent version or update your Flash plugin.
By Hai Do
29 October 2021


Several world leaders have said that humanity's future depends on efforts to fight climate change. They say the risk of failure could be high for countries attending the 26th U.N. Climate Change Conference, known as COP26.

Six years ago, nearly 200 countries agreed to separate plans to fight global warming in the 2015 Paris climate agreement. On Sunday, leaders will meet in Glasgow, Scotland to take the next step: Do more and do it faster.

Those efforts have not been easy. Except for a small drop because of the COVID-19 pandemic, carbon pollution from the burning of coal, oil and natural gas is increasing, not falling.

The United Nations estimated that, between now and 2030, the world will release up to 28 billion metric tons of greenhouse gases beyond the limit set in the Paris agreement. 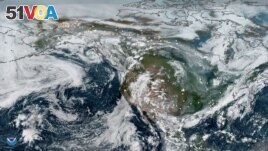 "Everything is at stake"

Many scientists say climate change is causing heat waves, flooding, lack of rain and major storms around the world. There were wildfires in Canada and Turkey, flooding in Europe and China, and record heat in Siberia and California's Death Valley.

Extreme weather also has led to losses of human lives and is estimated to cost the world's economy about $320 billion a year.

"Everything is at stake if the leaders do not take climate action," young Ugandan climate activist Vanessa Nakate said. "We cannot eat coal. We cannot drink oil, and we cannot breathe so-called natural gas."

European Commission Vice President Frans Timmermans said, "We are fighting for the survival of humanity." Dr. Maria Neira, director of public health and environment at the World Health Organization, added, "The unhealthy choices that are killing our planet are killing our people as well."

Pope Francis will not attend the COP26 meeting. But he said before Friday's meeting with American President Joe Biden, "These crises present us with the need to take decisions, radical decisions that are not always easy." The religious leader added, "...Moments of difficulty like these also present opportunities, opportunities that we must not waste."

World leaders have recently admitted some goals may not be met. U.S. Climate Envoy John Kerry told The Associated Press: "There will be a gap" on emission targets. That means the amount of gasses released will not meet limits set by international negotiators.

Under the Paris agreement, nations must reconsider their earlier promises to limit carbon gasses every five years. They are to come up with plans to cut even more and do it faster. This year's meeting, which was delayed one year by the pandemic, is the first to include the required plans to set new targets.

A UN study released in August said the world will cross the 1.5-degree-Celsius mark in the 2030s. That is earlier than some past predictions. The report's scientists said warming has increased in recent years.

It also studied five possible situations that might take place in the future. They are based on how much carbon gas emissions are cut by nations around the world. In three possible situations, worldwide average temperatures will increase by more than 2 degrees Celsius over pre-industrial times.

Small island nations in the Pacific Ocean and other poor, at-risk communities said in 2015 that a rise of 2 degrees Celsius would wipe them out.

"Our way of life is at stake," said Tina Stege, the climate representative for the Marshall Islands. "Our ability to provide our children with a safe and secure future is at stake." She added that island countries do not have higher ground to which they can move their people.

In Glasgow, divisions between nations are big, and trust is a problem, say several U.N. officials and outside experts.

Rich countries like the U.S. and European nations have historically produced the most greenhouse gases. Rich nations are now asking poor nations to cut or end the use of fossil fuels: coal, oil and natural gas. In return, they have promised – but have not given - $100 billion a year by 2020 to help developing countries switch to clean energy.

China is the world's largest carbon emitter. The country announced a new reduction target that is not much stronger than its earlier promise. The Climate Action Tracker estimated that even if every other nation cuts emissions by 45 percent and China does not, the world's total will drop only by 30 percent.

United Nations Environment Program Director Inger Andersen said China and the U.S. are very important. "We need these two powers to put aside whatever else and to show true climate leadership because this is what it will take," Andersen told the AP.

Seth Borenstein and Frank Jordans reported this story for the Associated Press. Hai Do adapted it for VOA Learning English with additional material from Reuters. Mario Ritter, Jr. was the editor.

global warming –n. the recent increase in the world's temperature that is believed to be caused by the increase of certain gases (such as carbon dioxide) in the atmosphere

greenhouse gases –n. (pl.) a number of gasses that trap heat and have been linked to warming in the atmosphere

at stake –idiom in a position to be lost or gained

radical –adj. very new and different from what is traditional or ordinary

opportunity –n. a chance to do something