Update Required To play the media you will need to either update your browser to a recent version or update your Flash plugin.
By Bryan Lynn
28 September, 2016


Israel is mourning the death of former President and Prime Minister Shimon Peres.

Peres died on Wednesday at age 93.

His death came two weeks after he suffered a severe stroke.

Peres held nearly every major political position in Israel during his long career. He served as prime minister twice. He held the mostly ceremonial job of president from 2007 to 2014. He also served as foreign minister and defense minister.

He was the longest serving member of parliament in Israel's history, serving in the Knesset for 48 years.

Peres was born in 1923 in what is now Belarus. He moved to Israel when he was 11 years old. By age 29, Peres became Israel's youngest defense minister in 1952. In that position, he was credited with developing the country's defense and aerospace industries.

On Wednesday, Israeli Prime Minister Benjamin Netanyahu said Peres had spent his life serving the Israeli people and trying to bring about peace.

"He set his gaze on the future. He did so much to protect our people. He worked to his last days for peace and a better future for all." 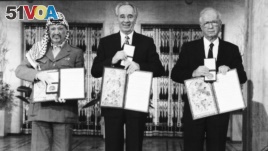 Peres won the 1994 Nobel Peace Prize for his work in negotiating the historic Oslo Accords, which established limited self-rule for the Palestinians. He shared the award with then-Prime Minister Yitzhak Rabin and Palestinian leader Yasser Arafat.

"He exerted persistent efforts to reach a just peace from the Oslo agreement until the final moments of his life," Abbas said.

"There are few people who we share this world with who change the course of human history," Obama said. "Not just through their role in human events, but because they expand our moral imagination and force us to expect more of ourselves."

United Nations Secretary General Ban Ki-moon said Peres had been a good partner with the U.N. and was always hopeful about the chances for peace.

"May his spirit of determination guide us as we work to ensure peace, security and dignity for Israelis, Palestinians and all the peoples of the region," Ban said.

Peres saw continuing violence between the Israelis and Palestinians and repeated breakdowns in negotiations. Yet he remained hopeful throughout his life.

Twenty years ago, Shimon Peres launched the not-for-profit Peres Peace Center. It develops economic, educational and cultural projects with the Palestinians, Egypt and Jordan. He continued leading the center's peace efforts until suffering the stroke.

Bryan Lynn wrote this story for VOA Learning English, based on reports from VOA's Richard Green, Victor Beattie, the Associated Press and Reuters. George Grow was the editor.

gaze – v. to look at someone or something for an usually long time

exert – v. to use influence or authority to make something happen

dignity – n. – the quality of being worthy or honor or respect