World Nomad Games Come to a Close in Kyrgyzstan

Update Required To play the media you will need to either update your browser to a recent version or update your Flash plugin.
By VOA
08 September, 2016

The 2016 Rio Olympics are over and the Paralympics are just beginning.

But in between, a much different kind of international sporting event took place in Central Asia. Instead of running, swimming, and basketball, athletes took part in sports like eagle hunting, traditional stick wrestling, and yurt-building. 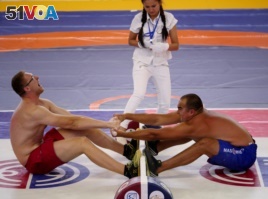 Thursday marked the final day of the World Nomad Games. Nomads are groups of people who move place to place instead of living in one place all the time. Competitors from more than 40 countries gathered in eastern Kyrgyzstan for the six-day event.

It included more than 20 sports and games that are traditional to nomadic cultures around the world. The unique event has trended this week on social media.

People on Twitter described the World Nomad Games as "intense" and "alive with color and history" and "crazier and cooler than the Olympics."

Kok-boru is one of the sports people are talking about a lot. Two teams compete for control of a headless goat. The goal is to carry the body to the other team's side. It is especially difficult because the players are on horseback.

The popular game is played under different names all across Central Asia.

The Kok-boru finals were held Thursday. The team from Kyrgyzstan defeated Kazakhstan by a score of 15 to 3. China finished third.

Another popular event was yurt-building. A yurt is a temporary home used by nomads in Central Asia. It is round and covered with animal skins.

In the competitive yurt event, teams were able to build the whole shelter in less than 13 minutes.

This was only the second World Nomad Games. Kyrgyzstan was home to the first Games as well, in 2014. But this year's event was much larger and received more media attention.

With the World Nomad Games now over, new fans of the event are already waiting for the next one.

One Twitter user asked, "Who wants to go to this next year?"

Ashley Thompson wrote this report. Caty Weaver was the editor.