Update Required To play the media you will need to either update your browser to a recent version or update your Flash plugin.
By Bryan Lynn
02 June, 2019


U.S. officials have approved the costliest medicine in history – a $2.1-million gene therapy that treats a rare childhood disease.

Gene therapy is a medical treatment in which healthy genetic material is introduced into cells to replace abnormal genes.

Over time, SMA can make it impossible for the child to move, swallow or breathe. The disease affects about 1 in 10,000 births. In 90 percent of cases, the condition causes death or the need for permanent breathing assistance by age two.

SMA is the leading cause of genetic infant death. 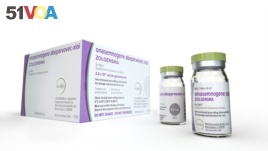 The U.S. Food and Drug Administration (FDA) recently approved Zolgensma for use in children who are under the age of two with SMA. The approval covers babies with the deadliest kind of the disease as well as those with forms that develop more slowly over time.

Novartis says Zolgensma is designed to repair the genetic cause of SMA by replacing a patient's abnormal or missing gene to halt progression of the disease. The one-time treatment can be performed in about an hour.

Novartis has defended the high cost of the gene therapy. It says the treatment represents a new kind of "transformational medicine" that opens the door to future gene therapies. It also said the $2.1-million therapy was about 50 percent less than other SMA treatments that can be ongoing for years.

Novartis said it will let health insurance companies break up the cost in payments of $425,000 over five years. It also plans to give money back if the treatment does not work.

The FDA said the drug's safety had been tested in completed and ongoing trials involving 36 patients between the ages of two weeks and eight months.

Most evidence of the treatment's effectiveness is based on the ongoing trials. In patient testing, babies with the most severe form of SMA who got Zolgensma within 6 months of birth had limited muscle problems.

Those who got the treatment very early in life did the best. Babies who were given Zolgensma after six months stopped losing muscle control, but the medicine was not able to correct damage already done.

The trial found the treatment "demonstrated significant improvement in their ability to reach developmental motor milestones." These included head control and the ability to sit without support.

The one other medicine for SMA approved in the U.S. is a drug called Spinraza. Instead of a one-time treatment, it must be given every four months. The U.S.-based Biogen, Spinraza's maker, charges $750,000 for the first year of treatment, followed by $350,000 per year after that.

The independent not-for-profit group Institute for Clinical and Economic Review rates the value of costly new medicines. The group said it considers the price of Zolgensma acceptable because it greatly "transforms the lives of families affected by this devastating disease."

While it is too early to know how long the effectiveness of the treatment will last, some doctors have hope that it could last a lifetime. Dr. Jerry Mendell is a neurologist at Nationwide Children's Hospital in Columbus, Ohio. He led one of the early patient studies involving Zolgensma.

When asked whether he believes the drug will continue to have long-lasting effects, Mendell told the Associated Press, "it's beginning to look that way."

He noted that some of those treated as babies are now 4 or 5 years old with no signs of the disease.

Bryan Lynn wrote this story for VOA Learning English, based on reports from the Associated Press, Reuters, Agence France-Presse and online sources. Ashley Thompson was the editor.

What are your thoughts on such high-price gene therapies? Write to us in the Comments section, and visit 51VOA.COM.

transformational – adj.able to produce a big change or improvement in a situation

milestone – n.an important event in the development or history of something