Update Required To play the media you will need to either update your browser to a recent version or update your Flash plugin.
By VOA
12 October, 2014
51VOA听写整理，转载请注明出处。文本仅供参考，欢迎纠错！

Facebook and other social media sites are free for everyone. But a new social media site promises to be more exclusive by only permitting people who are rich to join. The site is called Netropolitan. To join, users must pay $9,000. This includes a $6,000 entry fee plus $3,000 for the yearly membership fee.

James Touchi-Peters is the founder of Netropolitan. He is a composer and orchestra conductor from the eastern American state of New York. He says he believes there is a need and an audience for this service. He says he had trouble finding people like him on other social sites. 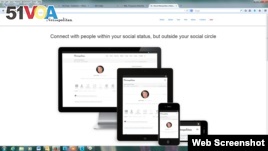 A screenshot from the Netropolitan website, providing information about the service and how prospective members might join.

He says Netropolitan is a place where rich people can talk about what he calls "the finer things in life." In his words, "Netropolitan is an online country club focused on connecting members around the world." He says it is "for people with more money than time."

Unlike Facebook, everything on Netropolitan is private. The site is not included -- or indexed -- by search engines like Google or Bing. Non-members can only see the log-in screen when they visit the site. Information to and from the site is hidden, or encrypted. This gives the site's members even more privacy.

Netropolitan does not have any advertising. And it will employ monitors to prevent bad behavior. Members must be 21 or older. And they must use their real names and addresses to register. Once they have registered, members can do things like create groups and join discussions on the site.

The website says it "will never publicly state the exact number of members in the club. And especially, we will NEVER release or verify the identity of any of our members -- ever."