Where in the World Do People Feel Safest?

Update Required To play the media you will need to either update your browser to a recent version or update your Flash plugin.
By Bryan Lynn
05 July, 2018


A new study takes a look at people's ratings of the safest and most dangerous places in the world.

The American research company Gallup asked people to tell about their experiences with crime and law enforcement. Gallup says its researchers carried out the study last year in a total of 142 countries and areas.

The researchers met with the individuals in person or spoke with them by telephone. People were asked these brief questions:

The findings were published in Gallup's 2018 Law and Order Index report.

Singapore received the top rating in the study – 97 out of a possible 100. In this Southeast Asian nation, 94 percent of people questioned in 2017 said they felt safe walking alone in their neighborhood at night. 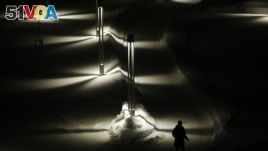 A pedestrian smokes a cigarette as she walks on a snow covered pathway in Alta, northern Norway, Monday, Feb. 1, 2016. (AP Photo/Alastair Grant)

Three northern European countries – Norway, Iceland and Finland - were in a tie for second place. Each received a rating of 93. Results showed 93 percent of Norwegians reported feeling safe walking around alone at night.

The Central Asian nation of Uzbekistan received the same rating as Hong Kong. They each had a score of 91. Switzerland and Canada tied at 90, while Indonesia received 89.

Seven nations were next on the list with scores of 88. The seven were Denmark, Slovenia, Luxembourg, Austria, China, the Netherlands and Egypt.

The United States received a rating of 84. That was the same score as the Czech Republic, Sweden, France and Taiwan.

At the bottom of the list was Venezuela, with a score of 44. The study noted that only 17 percent of the Venezuelans questioned said they felt safe walking alone at night. This was up from 12 percent in 2016.

Afghanistan scored next lowest with 45. Just 20 percent of Afghans said they felt safe walking around alone at night. This was a drop from the 36 percent reported in 2016. In addition, the study found that Afghans' trust in local police fell from 68 percent in 2016, to 31 percent last year.

Among the 10 countries where the least people said they felt safe walking alone at night, five were in Latin America. Four others were in African countries south of the Sahara Desert.

When it comes to where people have the greatest trust in their local police, the United States and Canada topped the list with a score of 82. Western Europe and Southeast Asia followed close behind, followed by South Asia, East Asia and Eastern Europe.

confidence – n. feeling or belief that you can do something well or succeed at something

household – n. people are family members and who live together in the same home

mug – v. attack and rob someone in a public place