Update Required To play the media you will need to either update your browser to a recent version or update your Flash plugin.
By Dan Friedell
27 October, 2015


The last time the Kansas City Royals won baseball's championship – the World Series – it was 1985. Ronald Reagan was the U.S. president. The rock band Wham!, led by singer George Michael, had two of the top three hits on the Billboard chart.

A year later, the New York Mets won one of the most dramatic World Series ever against the Boston Red Sox.

Neither the Mets, nor the Royals have been that close to glory since. 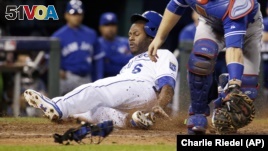 Lorenzo Cain of the Kansas City Royals is one of the key players in the Major League Baseball World Series starting this week.

In 2000, the Mets lost to the New York Yankees in what fans called The Subway Series. Last year, the Royals lost to the San Francisco Giants in the seventh and final game of the Series.

This season, one of the teams will become champions for the first time in almost 30 years.

And the first pitch is Tuesday night in Kansas City.

Baseball experts say the Mets are favored to win the championship. The magazine Sports Illustrated polled some of its writers before the series started. Four of the six writers picked the Mets to win because of their strong pitchers.

The Mets needed seven playoff wins to reach the World Series. Harvey, DeGrom and Syndergaard won six of them.

"We have a lot of weapons," Harvey said Monday.

But don't think all the Mets can do is pitch.

A surprise offensive star emerged in October for New York. Second baseman Daniel Murphy is known as a good "contact hitter." It means he hits the ball most of the time and gets on base often. But he hit few home runs.

In baseball, a homerun is a powerful hit that leaves the playing field and counts for one run. In this year's playoff, Murphy hit home runs in six consecutive games in the postseason, a major league record.

Kansas City was home to one of baseball's worst teams for almost 30 years. The Royals went through 13 managers between 1986 and 2010. When a team changes managers that often, it means it is losing more games than it wins.

Last year, the team made the playoffs for the first time since 1985.

The Royals advanced all the way to the World Series before losing to San Francisco. But the team gained experience along the way – winning tough games against Oakland, Los Angeles and Baltimore.

This year, Kansas City played even better. The team stayed in first place in the American League's Central Division almost the entire season. They beat Houston and Toronto to make it to the World Series.

The Royals are known for good pitching, good base running and even better defense. Outfielders Alex Gordon and Lorenzo Cain are two of the best in all of baseball.

But they can hit, too.

The Royals' shortstop Alcides Escobar is from Venezuela. He won the Most Valuable Player award for the American League Championship series. He got a hit nearly every-other time he batted.

Both teams are considered underdogs. One team is sure to be the champion for the first time in almost 30 years.

consecutive – adj. following one after the other in a series : following each other without interruption

underdogs – n. a person, team, etc., that is expected to lose a contest or battle

Who do you think will win the World Series this season? We want to hear from you. Write to us in the Comments Section or on 51VOA.COM.