Update Required To play the media you will need to either update your browser to a recent version or update your Flash plugin.
By Dr. Jill Robbins
21 August 2020

This week, we answer a question from Evelio in Colombia. He writes:

Why is a sort of men's underwear called "long johns"? Thank you.

When I looked up the history of the term "long johns," I found it was first used in World War II by American soldiers. That got me thinking about other words and phrases the soldiers invented.

Many words that we use today, or are considered slang terms, came from the soldiers in that war.

World War II was fought in many areas, including Europe. Because parts of Europe get cold in winter, the U.S. military gave soldiers special under-clothing to help keep them warm. This under-clothing covered much of the body, even the arms and legs. The soldiers called it "long johns." 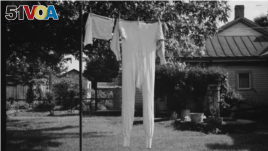 Long underwear of a river boatman hanging out on a line.

Long johns are believed to have been named after John L. Sullivan, a famous American boxer in the 19th century. Sullivan wore a similar-looking piece of clothing when he competed in boxing matches.

It is also worth noting that Americans sometimes call long johns "long underwear."

And, in parts of the U.S., people may use the term "long john" when they talk about a kind of baked sweet that looks like a bar. This treat might help you stay warm in cold weather, too.

Here is another term that was born in the military. When members of Britain's Royal Air Force did not know why a plane was experiencing problems, they claimed that a small imaginary creature was inside the aircraft. They had a name for this creature: a gremlin. American soldiers began using the term gremlin during the war. On a television program in the 1960s, a man reported seeing one outside of the plane in which he was flying.

A gremlin's destroying the plane! You've got to believe me!

Today Americans use "gremlin" when talking about small magical creatures.

The U.S. military is one place where following orders is very important. Soldiers called someone a "Big Wheel" if that person had power over them. Today, we use this term when talking about someone who has the respect of others.

Here is an example of how to use it in a sentence:

My father's a pretty big wheel down at the factory.

I hope that helps to answer your question, Evelio.

slang – n. words that are more common in speech than writing and are often used by a particular group of people

boxer – n. someone who competes in the sport of boxing

bake – v. to cook by dry heat, usually on a hot surface

bar – n. a solid piece of something that is longer than it is wide

magic – n. a power that enables people to do very unusual things