Update Required To play the media you will need to either update your browser to a recent version or update your Flash plugin.
By Bryan Lynn
08 April, 2017


The fifth-tallest building in the world, the Lotte World Tower, has opened in Seoul, South Korea.

The event was celebrated in a ceremony with a fireworks display that lit up the building and the sky.

The 123-story glass and steel structure is South Korea's tallest building. It rises 555 meters above the Seoul skyline. 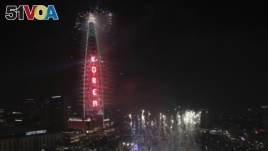 The tower features the world's highest floor made of glass. From this observation area, visitors can look straight down to the busy traffic about one-half kilometer below.

The building also has the highest swimming pool in the world, as well as the world's fastest elevator. The elevator can reportedly take passengers to the top of the building in just one minute.

The Lotte World Tower houses offices, personal residences and a seven-star hotel. The top 10 floors are used for public events and entertainment, including the observation deck and a rooftop restaurant. Attached is a large complex with a shopping mall, aquarium, movie theater, music hall and amusement park.

The launch came during a troubled time for the Lotte Group, which is known for its international chain of supermarkets. The group's chairman and some of his family members recently went on trial for fraud and other charges.

Lotte has also faced problems in China, where the government reportedly retaliated against it for providing land in South Korea for the U.S.-built THAAD anti-missile system.

The building was designed by American architecture company Kohn Pedersen Fox (KPF). It cost about $3.6 billion to build.

The company said the design combines "a modern aesthetic with forms inspired by the historic Korean arts of ceramics, porcelain and calligraphy."

KPF also designed the building that used to be South Korea's tallest building - Northeast Asia Trade Tower – which opened in the city of Incheon in 2014.

Below is a list of the top 10 tallest buildings in the world.

elevator – n. machine that carries people up and down in buildings

aquarium – n. building where people can see fish and other animals

amusement park – n. place for entertainment that can include games and rides

retaliate – v. do something bad to a person or thing that has hurt you

aesthetic – adj. relating to beauty and the way something looks