Update Required To play the media you will need to either update your browser to a recent version or update your Flash plugin.
By Ashley Thompson
20 March, 2018

Sudan was 45 years old. He was living in Kenya at a wildlife conservancy called Ol Pejeta. The conservancy said his age-related health problems had worsened, and that he was put to sleep on Monday.

Sudan was no longer able to stand, workers there said. His muscles and bones had weakened, and his skin had severe wounds. He also had an infection in his leg. 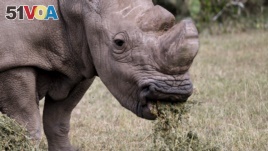 Sudan was born in the wild in Sudan. At two years old, he was captured and taken to a zoo in the Czech Republic. He lived there from 1975 until 2009, when he was moved to Ol Pejeta Conservancy.

Sudan had been part of the conservancy's effort to save the northern white rhinos from disappearing. Now, just two females are left. One is his daughter, Najin. The other is his granddaughter, Fatu.

Conservationists had tried many times to get Sudan to mate with the two females naturally. However, they were not successful.

Last year, they created an account for him on the dating app Tinder, where Sudan was described as "The Most Eligible Bachelor in the World." The effort was meant to raise funds for a $9-million fertility treatment to help the species survive.

Elodie Sampere is a manager at the Ol Pejeta Conservancy. She spoke to VOA after Sudan's death. She said there is still hope of keeping the species from disappearing.

"The death of Sudan does not mean the death of the species. We still have two females that are there," she said.

However, both Najin and Fatu are unable to carry a pregnancy to full term. So, scientists hope to use a technique called in-vitro fertilization. They want to combine the genetic material of a female and male northern white rhino. Then, they will implant the resulting embryo in the uterus of a female southern white rhino.

Northern white rhinos once lived across parts of Chad, Sudan, Uganda, Congo and the Central African Republic. Fifty years ago, about 2,000 remained in the wild. They became especially threatened because of armed conflicts in the area.

Many were also killed by poachers. In some cultures, rhino horns are used in traditional medicine. They can be worth up to $50,000 per kilogram. All international trade in rhino horn is outlawed. However, demand in several Asian countries continues to fuel an illegal black market.

Along with health problems, Sudan may have also suffered from loneliness in his final days at the conservancy. The only other male of his species, Suni, died in 2014. Sudan spent his final years surrounded by armed guards who protected him from poachers.

Ashley Thompson adapted this story based on reports by the Associated Press and VOA News reporter Rael Ombuor in Nairobi. Kelly Jean Kelly was the editor.

conservancy - n. an organization that works to protect animals, plants, and natural resources especially by purchasing and caring for areas of land

eligible - adj. able to be chosen for something

bachelor - n. a man who is not married

implant - v. to place (something) in a person's body by means of surgery

poacher - n. someone who catches or kills animals illegally