Update Required To play the media you will need to either update your browser to a recent version or update your Flash plugin.
By Bryan Lynn
01 December, 2016


The oldest living person celebrated a birthday earlier this week.

Friends, neighbors and her doctor joined Morano in her small apartment home in the northern Italian mountain town of Verbania.

She blew out three candles on her birthday cake. Each candle represented a number in her age.

"She dressed up and she was very proud," said her long-time doctor, Carlo Bava. "She posed for a photographer, and even asked if her hair looked good." 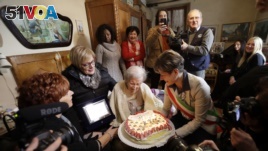 Verbania's Mayor Silvia Marchionini, right, presents Emma Morano with a cake during a celebration of her 117th birthday in Verbania, Italy, Tuesday, Nov. 29, 2016.

"I am happy to turn 117," Morano told those attending her party. She received a greeting from Italy's president, Sergio Mattarella. He wished her peace and continued good health.

Emma Morano is thought to be the last living person born in the 1800s. She outlived all her brothers and sisters, including one who died at age 102.

Her doctor noted that when Morano was young, people used to say she was weak and often sick. "Yes, yes," she said.

The world's oldest person told the Reuters news agency that while she is lucky to have lived so long, parts of her life were "not so nice." She worked in a factory until she retired at age 65.

Morano once told a reporter that the first man she planned to marry was killed in World War One. Then, at age 26, she was forced to marry a man she did not love. She said the man threatened to kill her if he did not marry her.

She had a son, but the baby died after just six months. She said the marriage was not happy and her husband was abusive. She kicked him out in 1938 and has lived alone since then.

Emma Morano says one of her secrets to living long is eating at least two uncooked eggs every day. Her doctor credits Morano's long life to her unusual diet, her genes and positive outlook on life.

Bryan Lynn wrote this story for VOA Learning English, based on reports from VOA News, the Associated Press and Reuters. was the editor.

proud – adj. feeling very pleased about something you have done

greeting – n. a message expressing good wishes to someone

candle – n. a wax stick that may be burned to produce light or heat

kick out – phrasal verb. to force (someone) to leave a place, house, group, school, etc.

outlook – n. a way of looking at something