Update Required To play the media you will need to either update your browser to a recent version or update your Flash plugin.
By Mario Ritter
27 September, 2017


The bristlecone pine is the longest-living thing on Earth. These trees, with their strangely shaped, wind-beaten limbs, can live up to 5,000 years.

But experts worry that a warming climate in some areas may threaten its future.

Researchers say warmer weather is permitting a similar kind of tree, the limber pine, to take over good growing places from the ancient bristlecone. They say the tree is being crowded out of mountainous areas where it grows. 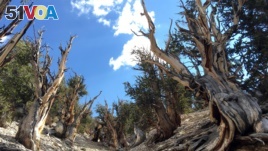 Gnarled, bristlecone pine trees grow in the White Mountains east of Bishop, Calif., July 11, 2017. Limber pine is beginning to colonize areas of the Great Basin once dominated by bristlecones.

Scientists at the University of California, Davis, compared the competing species to two old men in a very slow race up a mountainside. This race between such slow-growing trees takes thousands of years.

They say climate change is causing the competition.

Brian Smithers led the research project. His team worked with the U.S. Forest Service to study the trees.

"Limber pine is taking all the good spots," he said.

The bristlecone pine is the oldest individually growing organism, researchers say. They grow in high mountain forests in eastern California, Nevada and Utah.

These difficult conditions leave the trees with twisted limbs and shapes. To survive long periods without water, parts of the trees die, including much of their outer bark. This makes the trees appear dead, except for small green pine needles. They show that the bristlecone is indeed alive.

Experts have named the oldest known bristlecone pine "Methuselah." It is somewhere in the White Mountains of California. But it is not marked in any special way, so that people do not try to damage it.

The limber pine is the bristlecone's distant relative and competitor. It also can live a long time – up to 2,000 years. Researchers say it is found at lower elevations, where temperatures are warmer.

The scientists at the University of California, Davis, recently released results of a three-year study. Their research centered on trees that have started growing in the last 50 years in the Great Basin area of California's White Mountains. The researchers found that most of the trees growing at higher elevations were limber pines.

Smithers said the bristlecones are not in danger of disappearing. But he thinks they could be crowded out of some places where they have grown for thousands of years.

The researchers say the findings show how climate change can affect two kinds of trees. The information, they say, can help scientists understand more complex forests.

The research appeared in the scientific journal, Global Change Biology.

Mario Ritter adapted this story for VOA Learning English from an AP article with additional materials from the study. Ashley Thompson was the editor.

elevation –n. a place related to its distance above sea level, the height of an area

bark –n. the outer covering of a tree

limb –n. the branch of a tree

upslope –adv. to move up a hill or mountain