Update Required To play the media you will need to either update your browser to a recent version or update your Flash plugin.
By Dan Novak
07 March 2022


The official number of worldwide deaths from COVID-19 passed 6 million on Monday. The number shows how the pandemic, now in its third year, is far from over.

The Coronavirus Resource Center at Johns Hopkins University in Maryland recorded the total.

The virus continues to kill large numbers of people, even as people stop wearing face coverings and begin to travel more freely. 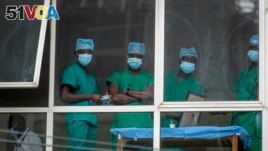 In this March 5, 2021, file photo, medical staff look out from a window as officials prepare for a ceremony to commence the country's first coronavirus vaccinations using AstraZeneca provided through the global COVAX initiative, at Kenyatta National Hospi

Small Pacific islands are experiencing their first large spread of the virus. The isolation of such nations had protected them for more than two years.

Hong Kong is also seeing deaths quickly rise. It is testing its entire population of 7.5 million three times this month.

Death rates remain high in Poland, Hungary, Romania and other Eastern European countries. The area has also seen more than 1.5 million refugees recently arrive from Ukraine. Ukraine has had poor vaccination rates and high rates of cases and deaths.

The United States has recorded nearly 1 million deaths, even with the country's high vaccine availability and wealth. The U.S. has the highest official death toll in the world. Case numbers in the U.S. have been dropping over the last month.

Death rates worldwide are still highest among people who are not vaccinated against the virus, said Tikki Pang. He is a professor at the National University of Singapore's medical school and former researcher with the World Health Organization.

"The large majority of the deaths and the severe cases are in the unvaccinated, vulnerable segment of the population," Pang said.

It took the world seven months to record its first million deaths from the virus after the pandemic began in early 2020. Four months later another million people had died. And 1 million have died every three months since. The death toll hit 5 million at the end of October. Now it has reached 6 million.

The world very likely hit its 6 millionth death some time ago. Poor record-keeping and testing in many parts of the world has led to an undercount in coronavirus deaths. There has also been an undercount in excess deaths. Those are deaths related to the pandemic but not from actual COVID-19 infection. They include people who died from preventable causes but could not receive treatment because hospitals were full.

Research on excess deaths by a team at The Economist estimates that the number of deaths from the pandemic is between 14.1 million and 23.8 million.

The world has seen more than 445 million confirmed COVID-19 cases. New weekly cases have been declining quickly in all areas of the world except for the Western Pacific, the World Health Organization reported this week. That includes China, Japan and South Korea.

The worldwide vaccine gap continues. Just 6.95 percent of people in poor countries are fully vaccinated. But more than 73 percent have been vaccinated in wealthy nations, says research organization Our World in Data.

However, at the end of last month, Africa passed Europe in the number of vaccine shots given daily. Still, only 12.5 percent of the continent's population has received two shots.

With about 250,000 reported deaths, Africa's lower death rate is thought to be from underreporting. There is also a younger and less mobile population there.

"Africa is a big question mark for me, because it has been relatively spared from the worst so far, but it could just be a time bomb," Pang said.

Dan Novak adapted this story for VOA Learning English from reporting by The Associated Press.

isolation — n. the state of being in a place or situation that is separate from others

excess — adj. an amount that is more than the usual or necessary amount

gap — n. a difference between two people, groups, or things

mobile — adj. able to move from one place to another

spare — v. to choose not to punish or harm