Update Required To play the media you will need to either update your browser to a recent version or update your Flash plugin.
By Alice Bryant
09 August 2021


A continuing lack of rain in parts of Brazil has officials and experts concerned that forest fires will again be a problem this year.

In Brazil, forest fire season is coming. The government space agency uses satellites to observe fires. It reported recently that more areas burned in July of this year than in any July since 2016.

Most Brazilian fires are caused by humans. They are often started by companies or people claiming land as their own. They burn down and clear trees to raise cattle or grow crops.

Historical records show that fires usually start increasing in June and reach their highest numbers in September. Fires can easily get out of control during the dry season, burning large areas of forest.

Brazil is home to the Amazon, the world's largest rainforest. It also is home to wetlands known as the Pantanal, also the world's largest wetlands. Both had many fires in 2019 and 2020 that caused the most forest loss in years. That led to criticism of the administration of President Jair Bolsonaro. He has repeatedly called for development in the Amazon.

This year, the Cerrado savanna is having more fires than usual. The grassland stretches across the central and western part of Brazil. A large area is said to have burned there in the first seven months of the year.

Ane Alencar is science director at the Amazon Environmental Research Institute. During an online meeting on July 27, she said there have been fewer Amazon fires this year because of cool weather. But she is afraid of what will happen when the weather changes. "I'm not sure that the people who cut down the forest will not light it," she said.

Brazil is also experiencing its most severe drought in 90 years. Officials announced on July 22 that a large group of experts will study fires in the Amazon, Pantanal and Cerrado and how to prevent them. The group includes about 6,000 federal and state police, firefighters, state public security and environmental officials.

On June 29, Bolsonaro ordered redeployment of soldiers to the Amazon to combat fires and deforestation. He also issued a 120-day ban on unauthorized outdoor fires. 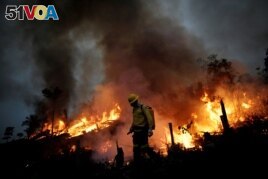 FILE - A Brazilian Institute for the Environment and Renewable Natural Resources (IBAMA) fire brigade member attempts to control a fire in a tract of the Amazon jungle in Apui, Amazonas State, Brazil, August 11, 2020. (REUTERS/Ueslei Marcelino)

Similar measures in earlier years did not prevent illegal fires. More than 90 percent of the Pantanal hot spots found in 2020 came after a similar presidential ban. That information comes from Vinícius Silgueiro, an expert at the Center of Life Institute in Mato Grosso state. "The sense of impunity is very high. Enforcement is well below what is necessary," Silgueiro said.

Mauren Lazzaretti is Mato Grosso's environment secretary. She said the federal and state governments last year began working together to make sure no areas were left at risk.

The state is also buying a helicopter and plans to deploy airplanes to drop fire-fighting chemicals. Pantanal farmers and businesses will loan the planes.

Last year, over four million hectares of the Pantanal burned. That is about 27 percent of the area and the most since official record-keeping began in 2003. Although the Pantanal regrows quickly, fires often kill local wildlife, like jaguars and caimans.

The size of the fires last year brought attention to the idea of individual responsibility, Lazzaretti said. There is more involvement this year from cities, farmers and native communities, she added.

The year before, fires in the Amazon led several European governments to openly criticize Bolsonaro's administration. Bolsonaro reacted by saying the fires were about the same as the average for several years and were down sharply from 15 years before.

Plant life in the Amazon rainforest takes about 2 billion tons of carbon dioxide out of the Earth's atmosphere each year. Human activity around the world is estimated to produce 40 billion tons yearly.

That makes the Amazon an important part of the world's effort to fight climate change. But a study led by a Brazilian ministry and published in July discovered something else. It found that the southeastern Amazon rainforest, heavily affected by logging, has been releasing more carbon than it stored.

Paulo Artaxo is professor of environmental physics at the University of S&#227;o Paulo in Brazil. He is also a member of the United Nations' Intergovernmental Panel on Climate Change. Artaxo said other recent studies have shown that areas in the western Amazon are now carbon neutral. A few years ago, scientists said it was a place that stored carbon.

Carlos Nobre is a climate scientist. He said Brazil's thick forest will stop being wet enough to remain in its current form. It will begin to become grassland.

Nobre said Bolsonaro's administration still has not done enough to save the rainforest.

He said the federal government continues to do nothing about illegal logging, deforestation and fires in the Amazon. He added, that those who do the crimes "continue to feel rather empowered."

carbon neutral –adj. having or resulting in no loss or gain of carbon especially of carbon dioxide gas in the atmosphere