Update Required To play the media you will need to either update your browser to a recent version or update your Flash plugin.
By Susan Shand
15 December, 2018


Recently released studies on climate change paint one of the worst pictures yet of warming in the polar areas.

The National Oceanic and Atmospheric Administration this week released its yearly Arctic report. It included a list of problems that the Arctic is facing, including record-low winter sea ice in some places, an increase in poisonous algae and concerning weather changes.

Arctic sea ice "remains younger, thinner and covered less area than in the past," the NOAA report said.

Scientist Walid Abdalati used the word "scary" to describe what is happening in the Arctic. He is a former chief scientist at the American space agency NASA and the director of the University of Colorado's environmental science program.

The report said continued warming in the Arctic is driving "change in the environmental system in predicted, and also unexpected, ways."

One of the more concerning problems is the record-low levels of winter sea ice in the Bering Sea, scientists say. 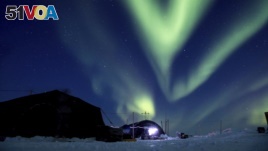 FILE - In this March 9, 2018, file photo provided by the U.S. Navy, the aurora borealis displays above Ice Camp Skate in the Beaufort Sea during Ice Exercise (ICEX) 2018.

The Bering Sea early this year "lost an area of ice the area of Idaho," said Dartmouth College professor Donald Perovich. He is a co-writer of the report. The western American state of Idaho is over 200,000 square kilometers.

Gay Sheffield is a marine animal scientist at the University of Alaska Fairbanks. She is studying the record-low ice and its effects. She lives in Nome, an Alaskan city that sits on the Bering Sea.

She has noticed the decrease in sea ice herself. She described to other scientists this week at the yearly American Geophysical meeting that her town still has open water. This is extremely unusual for the month of December.

She also said the area around Nome has seen environmental change because of the lack of sea ice, adding that many species of ocean life have died.

George Divoky is a bird scientist. He has been studying a species of birds called the black guillemots for the past 45 years. The birds he studies live on Cooper Island, in far-north Alaska.

In the past, he has observed 225 pairs of the seabirds arriving on the island to lay eggs. This past winter, though, he only counted 85 pairs. Of those, only 50 laid eggs. And only 25 successfully had babies. He said the lack of sea ice is to blame.

The melting has also caused the numbers of caribou and reindeer to drop by about 55 percent. That is because warming weather has brought flies and parasites to the area, says Howard Epstein of the University of Virginia. He is another co-writer of the report.

But it is not just the Arctic that scientists are worried about. NASA's newest space-based radar, Icesat 2, found that the Dotson ice shelf in Antarctica has lost more than 120 meters in thickness since 2003.

A new study released Monday by NASA found unusual melting in parts of eastern Antarctica. Scientists had thought the area was mostly safe from major changes caused by global warming.

Loss of ice in Antarctica could lead to a huge, catastrophic rise in sea level worldwide.

"We're starting to see change that's related to the ocean," Gardner explained. "Believe it or not this is the first time we're seeing it in this place."

polar – adj. of or relating to the North or South Pole or the region around it

mammal – n. type of animal that feeds milk to its young and that usually has hair or fur covering most of its skin