Wreckage Could Be From Missing Malaysia Airlines Flight

Update Required To play the media you will need to either update your browser to a recent version or update your Flash plugin.
By VOA
30 July, 2015


Investigators are trying to find out whether a piece of airplane debris found in the Indian Ocean is part of flight MH370. That is the name of the Malaysia Airlines jet that mysteriously disappeared nearly 16 months ago.

The piece is about two meters long. It appears to be a part on the wing known as a flaperon. Workers discovered the piece Wednesday on the French island of Reunion. The island is over 3,500 kilometers from where the Boeing 777 last had communications with air traffic controllers.

French aviation officials are examining the piece of wreckage. But they say it is too early to know whether the fragment belongs to the missing jet. If it does, the discovery could represent an important step toward solving one of the greatest mysteries in aviation history. 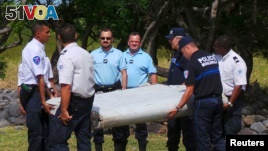 French gendarmes and police carry a large piece of plane debris which was found on the beach in Saint-Andre, on the French Indian Ocean island of La Reunion, July 29, 2015. (REUTERS/Zinfos974/Prisca Bigot)

Workers cleaning a beach on Reunion Island made the discovery earlier this week. They gave photographs of the debris to French aviation expert Xavier Tytelman. He tells VOA he is believes the piece belongs to a Boeing 777.

"We only found one match: it was with the flaperon of the Boeing 777," Tytleman told VOA. "It was not only the shape that matched, but also the holes for the connections in it."

Australian Deputy Prime Minister Warren Truss has been leading the search for the missing airplane off Australia's southwest coast. He called the discovery of the airplane debris, a potential breakthrough.

"It won't be all that helpful in pinpointing precisely where the aircraft might be located," he said. "But if this wreckage is linked to MH370, it'll certainly confirm that the aircraft has gone into the water in the Indian Ocean."

Erik van Sebille is an oceanographer at Imperial College London. He says it is possible that wreckage from MH370 made its way to Reunion from waters where officials believe the plane went down.

Mr. Van Sebille studies how debris travels across the ocean. He says that investigators may be able to use ocean currents and wind measurements to find out where the crash took place.

"It's not an easy task to do because over 17 months, the ocean is so chaotic and there is so much turbulence, if you start somewhere and you backtrack where the plane might have hit the water, you end up with an area that is probably a few hundred miles in diameter."

Such projections, however, would take a lot of time.

Australian Deputy Prime Minister Truss said Thursday that officials still believe the plane is somewhere within the current search area. He said the discovery of the debris is not likely to lead to any change in the search operation for now.

The Malaysia Airlines flight was carrying 239 people when it left from Kuala Lumpur on March 8, 2014, on its way to Beijing. It disappeared from radar less than two hours later, somewhere over the South China Sea.

Malaysian officials have said they believe someone with knowledge of aircraft turned off the plane's tracking devices and diverted the plane. However, an investigation has discovered few clues.

VOA's William Gallo reported this story from Washington. Mario Ritter adapted it for Learning English. George Grow was the editor.

debris – n. parts left after something has been destroyed

fragment – n. a part of something that has been broken

chaotic – adj. a state of disorder

potential – n. the possibility that something will happen or develop

tracking – adj. related to following or watching the movement of something

diverted – adj. sent in another direction than first planned