Update Required To play the media you will need to either update your browser to a recent version or update your Flash plugin.
By Dan Friedell
20 July, 2016


Retired professional wrestlers are suing World Wrestling Entertainment, also known as WWE, for head injuries they claim to have suffered in the ring.

The WWE is the latest American sports organization to face a lawsuit over head injuries, following the National Football League and the National Hockey League.

More than 50 wrestlers are listed on the complaint. That includes Joseph Laurinaitis, Jimmy Snuka and Paul Orndorff. Laurinaitis was known as "Road Warrior Animal," Snuka was "Superfly" and Orndorff was "Mr. Wonderful." 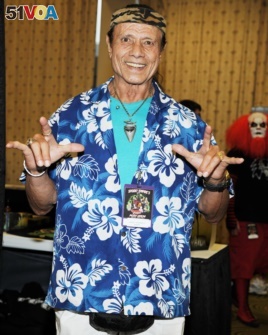 Jimmy 'Superfly' Snuka is one of the wrestlers suing WWE.

The lawsuit charges WWE with classifying the wrestlers as independent contractors instead of employees. This, the suit says, was to avoid paying injured wrestlers who could not work.

The suit says, "WWE wrestling matches, unlike other contact sports, involve very specific moves that are scripted, controlled, directed and choreographed by WWE." And the wrestlers' head injuries "were the direct result of the WWE's actions."

The complaint says many of the wrestlers have headaches, dizziness and memory loss. Others are showing signs of chronic traumatic encephalopathy, a brain disease that can only be officially diagnosed after death.

The wrestlers claim the organization knew about, but hid the long-term effects of head injuries they suffered in the ring.

The WWE, in a statement, called the lawsuit a "ridiculous" attempt by a lawyer who had filed two earlier lawsuits against the organization.

There have been high-profile cases in the U.S between sports leagues and their players. The National Football League settled recent lawsuits that claimed it knew about, but did little to protect its players from head injuries. The National Hockey League is defending itself from a lawsuit that names over 100 former players as plaintiffs in a similar case.

In April, a court approved a settlement that granted over 20,000 former NFL players a share of about $1 billion. The settlement for each player depends on the severity of a player's injuries and how long they played in the league.

Dan Friedell wrote this story for Learning English based on reporting by Reuters. Hai Do was the editor.

Do you think the wrestlers will be successful in their case? We want to know. Write to us in the Comments Section or on 51VOA.COM.

ring – n. an area that is used for shows and contests and is usually surrounded by ropes or a fence

complaint – n. a formal charge saying that someone has done something wrong

contractor – n. a person who is hired to perform work or to provide goods at a certain price or within a certain time

choreograph – v. to decide how a dancer or group of dancers will move during a performance

diagnose – v. to recognize (a disease, illness, etc.) by examining someone

script – n. a plan for what is going to be done or said in a particular situation