Update Required To play the media you will need to either update your browser to a recent version or update your Flash plugin.
By Ashley Thompson
10 December 2020


Hundreds of people visited a wet market on a recent weekday morning in the central Chinese city of Wuhan. They came to buy fresh vegetables and live animals like fish, frogs and turtles.

It has been almost one year since Wuhan reported the world's first cases of COVID-19 in one of its wet markets.

But as life in many places remains sharply affected by the pandemic, life in Wuhan has largely returned to normal.

"I'm not afraid, what is there to be afraid of?" said Nie Guangzhen, a fish and vegetable seller.

Few reminders remain of Wuhan's early part in the coronavirus pandemic, which has since affected more than 67 million people worldwide. 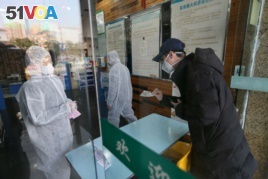 FILE - A man buys a face mask at a pharmacy store following an outbreak of the new coronavirus and the city's lockdown, in Wuhan, Hubei province, China January 29, 2020. (China Daily via REUTERS)

China first told the World Health Organization of 27 cases of "viral pneumonia" in Wuhan on December 31, 2019.

Officials shut down a wet market in the city the next day after discovering some patients were sellers or dealers there.

The move marked the start of a tense period for the city of 11 million people. Infection numbers rose quickly to 50,000 cases, including almost 4,000 deaths.

"I really missed these more fun and exciting times, like going out shopping and eating with my friends," said 27-year-old Hu Hang, while shopping at a popular Wuhan night market.

In the busy market street, sellers offered flowers and balloons. Street performers danced and entertained. Music played from stores along the road.

In the United States, the health system is under severe pressure as cases rise. Health experts warn the worst is still ahead. The country recorded 15,000 deaths over the past week, the deadliest seven days of the pandemic since April.

Leaders across Europe have introduced new restrictions on gatherings ahead of Christmas in an effort to prevent another wave of infections.

China has taken several steps to prevent a new wave of infections. These steps include mass testing millions of residents following small outbreaks.

At the entrance of housing compounds, workers check residents' smartphone health codes. In public parks, messages on red propaganda signs urge people to remain careful. Wearing face masks is not required, but most people do so in public.

"I haven't been overseas, so I don't understand it well, but looking at the TV it seems like foreign countries don't put human life first," said Mr. Li, a street food seller.

For many Wuhan locals, memories of the lockdown have been replaced by the city's fast reopening – and continued safety measures.

"I don't worry, because I'm doing a good job of protection," said wet market seller Nie. She noted that she continues to do things like disinfect and boil her clothes. "Even if there is a second wave, I will just stick to it."

The Reuters news agency reported this story. Ashley Thompson adapted it for VOA Learning English. Hai Do was the editor.

pneumonia - n. a serious disease that affects the lungs and makes it difficult to breathe

lockdown - n. a requirement for people to stay where they are, usually due to risks to themselves or to others if they move freely

transmit - v. to cause (a virus, disease, etc.) to be given to others

park - n. a piece of public land in or near a city that is kept free of houses and other buildings and can be used for pleasure and exercise

replace - v. to be used instead of (something)