Update Required To play the media you will need to either update your browser to a recent version or update your Flash plugin.
By Bryan Lynn
11 July, 2018


The world's very first photographs were taken in the 1830s.

Scientists now say they have found a way to recover lost images made from the very first photographic process. The new method uses X-ray technology and light imaging to help save images badly damaged by the effects of age.

Researchers from Canada's University of Western Ontario published a report on their findings.

The first widely accepted photographic process was the creation of France's Louis Daguerre in 1839. Images made by this method were called daguerreotypes. 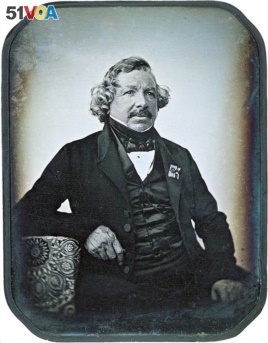 The process involved combining metal particles and chemicals on a silver-covered piece of copper to reflect, or give back, images of light. This reflective process was able to produce sharp, colorless pictures. In the beginning, the technology required people to sit completely still for at least one minute for the process to capture a photograph.

The daguerreotype first made it possible to capture and save "true" images that presented a realistic look at history. This is because, unlike paintings, daguerreotypes reflected exactly what was photographed.

But over time, daguerreotypes may suffer damage because of environmental conditions, such as heat and bright light. Some of the damaged images can become unrecognizable.

Research chemists at Western University say they have found a high-tech way to bring these photographic treasures back to life. The team developed the process over several years while studying the chemical changes that harm daguerreotype images.

The team used X-ray technology to map and examine daguerreotype plates from the 19th century. The process is designed to identify the levels and position of mercury particles on the plates.

Western University's Tsun-Kong (T.K.) Sham was one of the lead researchers on the project. He says mercury is necessary to creating photographic imagery. While the surface may be heavily damaged, the mercury particles remain.

"By looking at the mercury, we can retrieve the image in great detail," he said.

Researchers said the X-ray imaging process takes about eight hours on each daguerreotype plate. When complete, full images can be recovered, even if they could not be seen at all before.

The research chemists showed how their process helped restore two images from the collection of the National Gallery of Canada. Those photos - which experts say could have been created as early as 1850 - were tarnished so badly they were unrecognizable.

Madalena Kozachuk helped to lead the research. She is studying to earn a doctorate of philosophy in Western University's Department of Chemistry.

Kozachuk said that she was surprised when the image first appeared after being "hidden behind time" for many years.

"But then we see it, and we can see such fine details: the eyes, the folds of the clothing, the detailed embroidered patterns of the table cloth," she said.

The researchers say they did not find evidence that any part of the process damaged the 19th-century plates.

Photography experts estimate that millions of daguerreotype images may have been created over 20 years in the 19th century. Eventually, the process was replaced with other methods.

"By improving the process of restoring these centuries-old images, the scientists are contributing to the historical record," the university said in a statement. "What was thought to be lost, showing the life and times of people from the 19th century, can now be found."

The researchers say this new way to recover lost images without damaging effects will help museums breathe new life into some of their oldest image collections.

photograph – n. a picture or likeness made by a camera

reflect – v. to show or be a sign of something

plate – n. a flat piece of metal or glass

retrieve – v. to get and bring back from a place

tarnish – adj. having a thin layer of material on the surface of metal that damages it or makes it look dull

fold – n. a part of something (like) cloth that lies or hangs on another part

embroider – v. sew a design on a piece of cloth

restore – v. return something to an earlier or original condition by repairing it, cleaning it, etc.

contribute – v. to help cause something to happen