Update Required To play the media you will need to either update your browser to a recent version or update your Flash plugin.
By Phil Dierking
22 September, 2018


On a warm Saturday afternoon in the Democratic Republic of Congo, a group of men sit outside a shopping center in Kinshasa, the capital.

Some of the men wear heavy gold jewelry and have unusual hair and clothing styles. They are rap musicians and they look the part. But this meeting is not about music. The men are discussing politics and the long-delayed elections Congo is to hold in December.

One man in a black T-shirt stands and says he is thinking of seeking local office. Then Lexxus Legal, the most famous rapper in the group, goes to the stage.

Do not wait to run for office, he says. If a national level office seems too high, he continues, go door-to-door to ask for support in your local communities.

Lexxus Legal has been in the music business for 20 years. He writes songs about social and political issues. They include "The Art of War," "Misunderstood" and "Dare Peace."

Lexxus Legal is one of the most respected DRC rappers. Now, he tells the crowd, he will seek a seat in the national parliament.

"I want it to be known that I'm not starting a new career, but it's simply a logical follow-up," he says. "I have always been politically minded even though I never joined a political party."

At the office of the ruling People's Party for Reconstruction and Democracy, people move to the sounds of Congolese dance music. The lead singer, Jigodo Ekopo excites the crowd.

"Clap for Shadary! Shadary!" he says.

The crowd is a mix of politicians, women selling food and unemployed young men guarding the gate. They all clap loudly.

Current President Joseph Kabila announced last month that he is resigning, after 17 years in office. He has named former interior minister Emmanuel Shadary as his choice for the next leader of Congo. 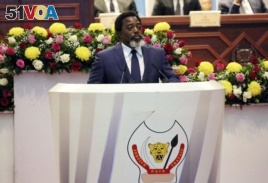 Ekopo agrees with that choice. He makes money by singing praises of the ruling party.

"We are not musicians, we are not artists. We are politicians," Ekopo told VOA. "Kabila is the father of democracy. He has handed power over to Shadary and we support that."

"Politicians take musicians as simple public entertainers who must sing their praises after meetings. At the very beginning, I refused to play that game. I have never performed during political discussions or meetings, but I don't criticize artists that do this," he says.

The ruling party often represses the opposition. It has barred six opposition members from seeking the presidency in the upcoming elections. Former rebel and vice president Jean-Pierre Bemba is among those barred. But, he is fighting the ban. He is considered strong competition to the ruling party candidate.

Popular rapper Bob Elvis released the hit song "Degage" a few weeks ago. It condemns corruption of the ruling party. Elvis's family told VOA that two weeks ago state security forces seized the singer and held him for days.

Elvis is now released, but he has avoided the media since.

Many other music artists stay away from heavy issues in their work.

"Music should be fun. That's why we do it. That's why people like it," says singer Rihanna Prescott. "It's happy, especially Lingala music, our local music."

Prescott is the lead singer for the band that she and her friends created recently, Star Music. They do not talk about politics in their music.

However, musicians like Lexxus Legal are ready for whatever changes their political goals bring. Legal says that if he is elected for parliament, he will have to slow down his music-making and face politics.

But he is not worried. He says, "I know my fans will understand."

This story was originally written by Chika Oduah for VOANews. Phil Dierking adapted the story for Learning English. Caty Weaver was the editor.

clap - v. to hit the palms of your hands together usually more than once

entertainer - n. a person (such as a singer, an actor, or a comedian) who entertains other people

style - n. a particular way in which something is done, created, or performed