She is the 23rd-highest paid executive of 200 on the Bloomberg Pay Index. Top executives often receive a pay, or compensation package that includes cash, with options to buy stock in their company, known as "stock options."

The shares of her company, Yahoo! Inc., are down more than nine percent since February 2014. But her stock options are still worth $14 million after the stock slide, according to Bloomberg. This is because the options given to her in 2014 are valued at the company's share price 15 months earlier. 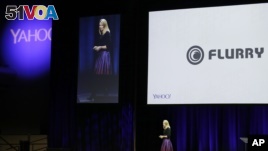 Only one other CEO in the Bloomberg Pay Index "benefits from such a structure," wrote Bloomberg.

Alan Johnson is managing director of compensation consulting firm Johnson Associates. He told Bloomberg that Mayer's compensation has "been a windfall for her."

Yahoo hired Mayer to revamp the struggling website company. The stock climbed 123 percent under her leadership. That was partly because Yahoo has a stake, or part, in Chinese e-commerce giant Alibaba Group Holding Ltd., reports Bloomberg.

Mayer has "struggled to show headway turning around Yahoo's own business," reports Bloomberg.

In 2014, Mayer's total pay, including cash and stock, increased 69 percent to $42 million, according to Yahoo. She received stock valued at about $11.8 million and options valued at $28.2 million.

Yahoo's board praised her performance in 2014.

Last week, Yahoo's board decided not to move forward with a spin-off of its $32 billion stake in Alibaba, according to the New York Times. The stake in Alibaba is Yahoo's most valuable asset. Instead, the board announced that Yahoo would pursue a spinoff of its core Internet business.

Mayer's leadership of Yahoo has come into question at a time when the company seems to be in a slump.

"Yahoo's core Internet operations are struggling, even though Ms. Mayer has made dozens of acquisitions, added original video and magazine-style content, and released new apps," reports the New York Times.

Mary Gotschall adapted this story from various sources for Learning English. Kathleen Struck was the editor.

compensation – n. payment given for doing a job

slump – v. to decrease suddenly and by a large amount

windfall – n. an unexpected amount of money that you get as a gift, prize, etc.

revamp – v. to make (something) better or like new again

revitalize – v. to make (someone or something) active, healthy, or energetic again