Update Required To play the media you will need to either update your browser to a recent version or update your Flash plugin.
By Ashley Thompson
22 December, 2016


The American dictionary Merriam-Webster has named "surreal" its 2016 Word of the Year.

Merriam-Webster's Learner's Dictionary defines the adjective as "very strange or unusual" or "having the quality of a dream."

The word entered the English language in the 1930s, following the artistic movement known as surrealism. 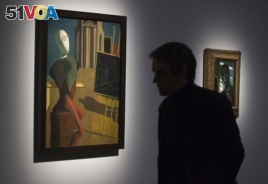 An example of surrealist art

Merriam-Webster says searches for "surreal" rose after several world events and tragedies in the past year.

Major increases in the number of lookups directly followed the terrorist attacks in Belgium and France, the overthrow attempt in Turkey, the Brexit vote, and the death of American musician Prince.

But, Merriam-Webster reports, the largest increase in searches for "surreal" came just after the United States presidential election last month.

Its meaning comes from the word's two parts. The word "real" comes after the preposition "sur," which means "above" or "over" in the French language.

"Surreal" is often used to describe something shocking. People might use the word when they cannot believe -- or do not want to believe -- reality.

"Surreal" can have a negative or positive meaning. For example, the Grand Canyon or a trip to the Moon could be described as surreal.

Other popular words of 2016 include revenant, icon, and bigly, Merriam-Webster says.

Revenant means "one that returns after death." It comes from the French verb for "return." The Oscar-winning Hollywood film "The Revenant" drove this word's popularity.

People searched for the word "icon" in high numbers following the death of pop star Prince. It means "a person who is very successful and admired." 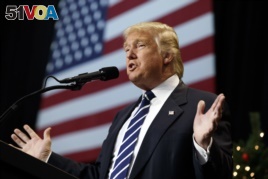 People questioned whether the adjective "big" can be used as an adverb in the English language.

But language experts agreed that Trump actually said "big league." This expression describes something very successful or high-level. Trump used it as an adverbial phrase.

Language experts also agreed that "bigly" is a word, although it is not often used.

Other dictionaries have also announced their 2016 words of the year.

The Oxford-English Dictionary chose "post-truth," which describes situations in which "facts are less influential in shaping public opinion than appeals to emotion and personal belief." The phrase became popular during the 2016 U.S. presidential elections.

Dictionary.com named "xenophobia" its Word of the Year. It means "fear or hatred of foreigners." A huge increase in searches for the word happened on June 24 -- one day after Britain voted to leave the European Union.

What would you choose as your 2016 Word of the Year, in both English and your native language? Explain your choice in the comments section!

adjective - n. a word that describes a noun or a pronoun

lookup - n. the action of getting information electronically

adverb - n. a word that describes a verb, an adjective, another adverb, or a sentence and that is often used to show time, manner, place, or degree