60 Years Later, 'An Appeal for Human Rights' Still Has Meaning

Update Required To play the media you will need to either update your browser to a recent version or update your Flash plugin.
By Susan Shand
16 March 2020


Sixty years have passed since American Roslyn Pope came home from Europe to the southern United States. At the time, parts of the South still enforced segregation of the races. Blacks were required to live separately from whites.

Concerned about injustice and angry, Pope sat down and wrote a document that became "An Appeal for Human Rights." It was published on March 9, 1960. It announced the formation of the Atlanta Student Movement, whose campaign of civil disobedience helped end racist laws and policies across the South. 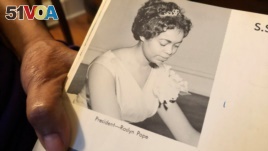 In this March 4, 2020 photo, Roslyn Pope shows her Spelman College yearbook at her home in Atlanta. As a 21-year-old Spelman senior in March 1960, Pope wrote "An Appeal for Human Rights." (AP Photo/Michael Warren)

After all this time, Roslyn Pope is still deeply worried that the rights she and others fought for are slowly disappearing.

"We have to be careful. It's not as if we can rest and think that all is well," she told The Associated Press last week.

The "Appeal" quickly became a civil rights call to action after it appeared as a full-page advertisement in Atlanta's newspapers. It was denounced by Georgia's then governor, Ernest Vandiver. However, Pope's "Appeal" was celebrated in many other areas. The New York Times and The Los Angeles Times reprinted it. It also was entered into the Congressional Record, the official record of the U.S. Congress

The idea was to explain why black students would not listen to their parents, professors and police who urged them to end segregation through the political system. The students decided to take action.

It called on "all people of good will" to work to end segregation.

"We do not intend to wait...for those rights which are already legally and morally ours to be meted out to us one at a time," it said.

"The time has come for the people of Atlanta and Georgia to take a good look at what is really happening in this country, and to stop believing those who tell us that everything is fine and equal," it said.

The students persuaded Atlanta's black families to boycott segregated stores and theaters. It told them to repeatedly seek service in places where black people were not permitted.

After many acts of nonviolent protest, hundreds of students were arrested throughout that spring and summer.

Born and raised in Atlanta, Pope said she did not know how it felt to be free until she was 20, when she spent a year in Europe on a Merrill scholarship.

"There were...no places I couldn't go, no programs I couldn't take advantage of, no limits to my existence. I could eat where I wanted — I couldn't do that in Atlanta," she said. "I felt like the shackles had been taken off me."

When she returned to the United States, "I was so miserable. I just didn't know how I was going to stand it," she said.

Pope said she was drinking coffee with Julian Bond, who would later become a leader of the civil rights movement, when they learned about a sit-in in North Carolina. During the protest, black students would enter an all-white restaurant and refuse to leave.

‘Why aren't we doing that?' Bond and Pope asked themselves.

"We decided to start a movement," Pope recalled.

College officials asked Pope, Bond and other students to write a public document explaining their decision to act. Pope wrote it herself, while Julian Bond used a typewriter to put her words to paper.

Their campaign of boycotts and sit-ins forced white leaders to desegregate stores, theaters and schools.

Pope went on to teach religion, music and English literature to college students in New York, Pennsylvania and Texas. She also has two daughters.

Racism, Pope said, "is such obvious evil. And it seems to me that people don't try to hide it so much anymore."

intend – v. to plan or want to do (something)

mete – v. to give (something) to the people who you decide should get it

typewriter – n. a machine that prints letters or figures on a sheet of paper when a person pushes its keys

obvious – adj. very clear for all to see