Update Required To play the media you will need to either update your browser to a recent version or update your Flash plugin.
By Jonathan Evans
12 November 2021


An 89-year-old man from the American state of Rhode Island has reached a goal he spent 20 years working toward and nearly a lifetime thinking about. He earned his doctorate, or Ph.D., and became a physicist.

Manfred Steiner successfully defended his dissertation recently at Brown University in Providence. A dissertation is a long piece of writing about a particular subject that is done to earn a high-level degree at a university.

Steiner values this degree because it is what he always wanted — and because he overcame health problems that could have interfered with his studies. 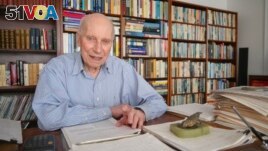 Manfred Steiner, who earned his Ph.D. in physics from Brown University at the age of 89, is photographed in his home office in East Providence, R.I., Wednesday, Nov. 10, 2021. (AP Photo/Stew Milne)

"But I made it, and this was the most gratifying point in my life, to finish it," he told The Associated Press.

As a young person in Vienna, Austria, Steiner wanted to become a physicist after reading about Albert Einstein and Max Planck.

But after World War II, his mother and uncle advised him that studying medicine would be a better choice. He earned his medical degree from the University of Vienna in 1955 and moved to the United States soon after. In the U.S., he had a successful career studying blood and blood conditions, or hematology.

Steiner studied hematology at Tufts University and biochemistry at the Massachusetts Institute of Technology before becoming a hematologist at Brown University. He became a full professor and led the hematology department at Brown's medical school from 1985 to 1994.

Steiner helped establish a research program in hematology at the University of North Carolina. He directed that program until he retired from medicine in 2000 and returned to Rhode Island.

Steiner found medical research pleasing, but it was not quite the same as his interest in physics.

"It was something like a wish that was never fulfilled, that always stuck in the back of my head," he said. "I always thought, you know, once I'm finished with medicine, I really don't want to spend my life just sitting around and maybe doing a little golfing or doing something like that. I wanted to keep active."

At age 70, he started taking undergraduate classes at Brown. He was planning to just take a few classes that interested him. But by 2007, he had earned enough credits to join the doctoral program.

Physics professor Brad Marston was surprised when Steiner entered his quantum mechanics class. Marston had taught graduate students in their 40s, but never in their 70s. But the professor soon realized how serious Steiner was about the subject and how hard he worked.

"He has written many papers in medical science, more papers than I've written in physics. He already had a scientific way of thinking that younger students have to develop," Marston said. "One thing that's really true about Manfred is he perseveres."

Steiner defended his dissertation in September after recovering from a serious medical condition.

Steiner now hopes to help the professors he befriended during his studies with their research.

After the university published a story about Steiner on its website, people across the U.S. contacted him to ask for advice on how to go after their dreams later in life.

He said his advice is: Do what you love to do.

Jennifer McDermott reported on this story for the Associated Press. Jonathan Evans adapted this story for Learning English. Bryan Lynn was the editor.

fulfill – v. to succeed in achieving something; to make something, such as a dream, true or real

credit – n. a unit of schoolwork

persevere – v. to continue doing something or trying to do something even though it is difficult