Update Required To play the media you will need to either update your browser to a recent version or update your Flash plugin.
By Mario Ritter Jr.
21 September 2021

Identical twins are two people born at the same time who are produced from a single egg and look almost exactly the same.

The announcement came Monday. It took place on Respect for the Aged Day, a national holiday in Japan. 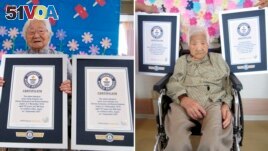 Umeno Sumiyama and Koume Kodama were born on Shodoshima island in western Japan on November 5, 1913.

The twins were separated after elementary school. Kodama was sent to work as a maid in Oita on Japan's southern island of Kyushu. She later married there. Sumiyama remained on Shodoshima island and had her own family.

The sisters said they experienced difficulties in their younger days. Growing up, they said they were bullied because of prejudice against children of multiple births in Japan.

The sisters lived their own lives for many years. They rarely got together until they were 70. They then started taking trips together to some of the 88 Shikoku temples. They enjoyed being reconnected.

Guinness World Records announced the new record in a statement.

Because of anti-coronavirus measures, the certificates for their record were mailed to the separate nursing homes where they now live. Guinness said Sumiyama accepted hers with tears of happiness.

Their families told Guinness that the sisters often joked about outliving the earlier record holders, known as "Kin-san, Gin-san." Those twins became extremely popular in Japan in the late 1990s for both their age and humor.

Japan has the world's fastest aging population. The health and welfare ministry says about 29 percent of Japan's 125 million people are 65 years or older. About 86,510 of them are 100 years or older.

Mari Yamaguchi reported this story for the Associated Press. Mario Ritter Jr. adapted it for VOA Learning English. Ashley Thompson was the editor.

bullied –adj. to have been frightened, hurt or threatened by someone stronger

prejudice –n. an unfair feeling of dislike for a person or group because of race, sex, religion or some other reason

temple –n. a building for worship or religious observance

certificate –n. a document that is official proof that something happened or has been done